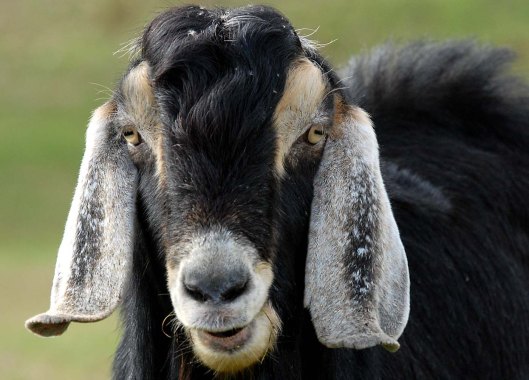 In a staring contest, the goat will always win.

I know this to be true. I try to stare down a goat every morning. And I lose.

Every morning I go down to the barnyard, food for the animals in hand. Each goat gets a couple of carrots, a scoop of goat food, and “hard bread”—baguettes mostly, purchased fresh at the boulangerie a day or two ago but not entirely consumed. (In Portland, we buy Dave’s Bread: incredibly tasty, so nutritious that it’s probably banned at the Tour de France, and capable of lasting until Armageddon. A baguette, on the other hand, is stale before nightfall. Why is that?)

I digress. There are three goats in the yard: Biggsy, Babs, and Ronnie. Biggsy and (especially) Ronnie are bullies. Babs is the runt, but she’s affectionate and appreciative—the Cinderella of the group, in a third-sister sort of way. She’s also a slow eater. The bullies finish their breakfasts first, then trot over to Babs’ pail, heads lowered, intending to butt their way to her food.

Except for Tom. Tom stands guard guard over Babs while she eats, staring at the bullies, my dare as deadly as a duel. Eventually Biggsy tires of me and walks away sullenly, but Ronnie stares back, a gaze as eternal as pi, never blinking. Google says goats have eyelids but I don’t believe it. At least not Ronnie. Ronnie never blinks. When I hear Babs chomp her last carrot, I’m always the one to break the trance. 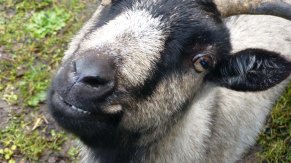 Kiss me, you fool 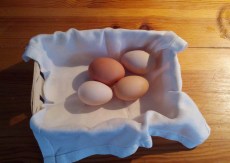 If I were a rooster, I’d crow

Do you think I need a shave?

All of this is accompanied by a concert of bellowing brays from Violette, the neighbors’ donkey, demanding her carrot too. This is not part of my contract, but unlike goats, donkeys’ eyes are pools of omniscient magnanimity, with eyelashes to match. One cannot refuse a donkey’s eyes.

Contrapuntally, one hears the restless shuffling of chicken feet in the henhouse. They’re behind the foxproof door that I moved into place the night before, and now they want out for breakfast. I feel their frustration: we all must wait until Babs finishes her last morsel and dabs her lips before life goes on. The five hens are always the last to feel gratification.

Actually I’m the one to feel grateful: five hens equals an average of three fresh eggs a day with golden yolks that stand up in a frypan like an Army recruit. I may never be able to eat a store-bought egg again.

Timing is critical: Wait too long after sunrise (which will occur two hours earlier when we leave than it did when we arrived) and the barnyard racket wakes the entire neighborhood; wait too long after sunset and the fox will exercise his option. We will be eating oatmeal the rest of our stay if the fox has his way.

I describe this little scenario by way of defining the fourth of the five words I’m using to describe our French adventure: responsibility.

We signed a contract, a contract that clearly defines the duties we are to perform in exchange for three months of free board. The duties are hardly exhausting, but they are unrelenting: I must oblige them as reliably as the postal service obliges the mail. Avec le devoir il ya l’honneur. With duty, there is honor. It’s all a matter of responsibility.

Tell that to the goats.

(Credit for the photo at top goes to EastBayRI.com. I probably should have used a picture of Ronnie, but this one is so badass!)