I have been beating myself up for fourteen years for not having patented the wheel.

After all, there are few people on Earth who revere the wheel more than I do, and fewer still who have put it to more frequent use. But John Keogh of Australia thought to patent it (Innovation Patent #2001100012, awarded in 2001), while I was lying back, delighting in its rewards.

I’ll leave it to you to research Mr. Keogh’s remarkable achievement and subsequent professional career (he was awarded the Ig Nobel Prize for Technology in the same year), but for now I offer the third of my five words used to describe our French adventure: Wheels.

Wait. Before I introduce Pierre de Martizay (“Pierre” for short, our shooting brake), we must discuss Martizay itself.

Martizay, the community in which we live, doesn’t have much to offer by way of services. Few communities of its size (1,039 according to the 2009 census) do. See for yourself: 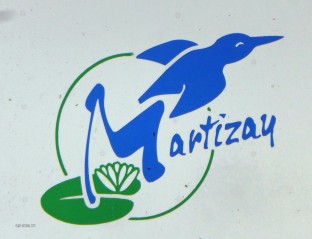 A back street in Martizay

There’s a certain beauty in antiquity

One of Martizay’s two boulangeries

The other boulangerie. The French love their pastries and bread: two boulangeries isn’t too many.

Gotta have a church. Church gotta have birds.

Rush hour in the center of town

The restaurant (there’s only one)

The pub (there’s only one)

Fortunately, Martizay is strategically located equidistant from two larger cities, Châtellerault to the west (pop. 31,500), and Châteauroux) to the east (pop. 46,400). Each is about a half hour away. To the south, Le Blanc (pop. 7,000, fifteen minutes).

The times quoted above assume one travels by car. With a car, restaurants, train stations, hardware stores, and (most importantly) supermarkets are just the twist of a key away. Without a car, we would be at the mercy of the services offered in Martizay, and would no doubt die of starvation, or isolation, or both.

Pierre is on loan from our gracious landlords John and Jackie. He’s a 2001 Peugeot 406, and he’s all ours for the duration of our stay. He offers a wealth of features:

For a guy who has owned Porsches and BMWs, Pierre is a bit dowdy — he looks like a car my mother once drove — but he charms me just the same. I’d take him home if John and Jackie would let me.

Another loan from John and Jackie, our bikes whisk us to and from downtown Martizay, a four-minute bike ride (but a twelve-minute walk). Downtown is where the two boulangeries are located, and like the French, we have become addicted to fresh baguettes (with lemon curds, but that’s a post for another day).

Louise returns from market on her bike

The weather is warming up here. Soon we’ll be able to ride the bikes and explore La Brenne, the huge regional park nearby. We’re looking forward to that.

I’m about to reveal a secret (or make a confession) of which few are aware. Last October, after having resisted the charms of motorcycles for seventeen years, I bought one. The last time I bought a bike was in 1979, the last of a long string of motorcycles that I had been riding since I was thirteen. I rode that 1979 bike for nineteen years. It was the best bike I ever owned. Best. Bike. Ever.

That bike—an SR500 from Yamaha—was discontinued in the American market in 1981. I probably would have bought a newer version sometime during those nineteen years, but it simply wasn’t available. I sold it in 1998, something I’ve regretted ever since…

…until last October, when Yamaha announced they were bringing the bike back, as a retro model, albeit in limited numbers: only 500 this year. I bought one immediately, before they became extinct again. 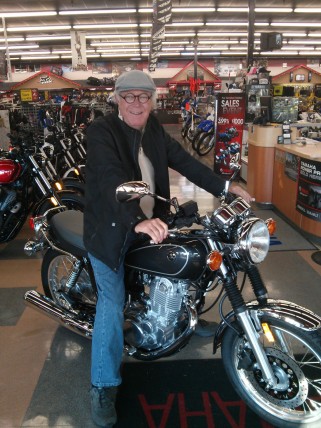 Sally Rae and me at the dealer’s showroom, where she still resides

But we were planning to leave the country not long thereafter and parking the bike in downtown Portland while we were gone would have been foolhardy and expensive. I asked the dealer to store her until we returned, and that’s what he is doing.

In other words, even though I own her, I haven’t seen Sally Rae (of course she has a name) since October, and she has never been ridden.

Why mention her here? Because she fills hundreds of idle hours (and we have lots of those) while I decide on accessories, read manuals, and plan routes to be explored upon our return. When it comes to falling asleep, Sally Rae is infinitely better than counting sheep.

People seem to be slower to recognize blessings than misfortunes. I know I’m guilty of that. But today all my thoughts are about my blessings. And today, all the blessings I’m thinking of have wheels.