Time was when French kings adopted Italian artists like puppies. François I adopted Leonardo da Vinci because François wanted Italy and kept failing to win it, but its bling was nonetheless irresistible. At the king’s invitation, da Vinci traveled from Milan to the city of Amboise via donkey in 1516, carrying the Mona Lisa in his saddlebag, and stayed there until his death in 1519.

His guest house was the Clos de Lucé, an old royal household half a mile from the king’s chateau in Amboise, which we visited the other day. As the king’s “First Painter, Engineer, and Architect,” da Vinci had busy days designing a Utopian city, a few castles, some gardens, and all kinds of amazing machines: catapults, bridges, an army tank, a machine gun, the first automobile, and the forerunner of the bicycle. Every day the king came by for a chat. 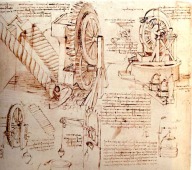 Design for a transmission

A copy of the Mona Lisa

A bedroom at Clos de Lucé

A sitting room in the Clos de Lucé. Note the tapestries.

The Clos de Lucé. A da Vinci helicopter is displayed on the grass.

Design for a “portable bridge”

A walking mechanical lion, designed to open and spill lillies onto the street

Forerunner to the bicycle

Louise at Clos de Lucé with Amboise in the background

The gadget-obsessed Tom enjoyed studying the many designs and working models strewn over the manicured grounds, and we both enjoyed pondering the amount of energy the man must have had to produce the drawings, the designs, the philosophy, the art and music—and still have time for a chat every day.

Leonardo dropped a hint on his deathbed, which was right there on the second floor of the house. His last words: “I have offended God and mankind because my work did not reach the quality it should have.”

Maybe his last words should have been: “Send the Mona Lisa back to Italy.” Because the French still have it.