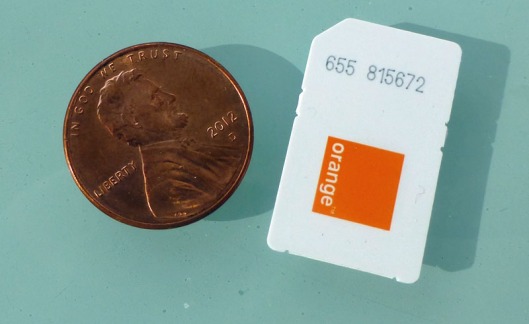 We Americans suffer unnecessarily when it comes to cell phones. Things are changing, but there is resistance. And why shouldn’t there be? There’s money to be had!

Although it’s no longer strictly company policy, most Americans still buy their cell phones on a contract. The initial “price” of the phone is ridiculously low (often free), but the penance paid is a two-year contract with a minimum monthly payment and a near-criminal cancellation fee. At the end of the two years, you’ve paid for the phone at retail prices and then some. It may be undisclosed, but the payment is made regardless.

It doesn’t have to work that way in Spain. Here’s how we did it:

First, we bought “unlocked” phones (often referred to as “GSM” phones, for Global System for Mobile Communications). These we bought before we left Portland. Unlocked phones are sold like computers: there are occasional discounts, but the essential deal is cash up front. There are no contracts.

GSM phones come in all flavors and prices, from the old flip phones to fancy smart phones. I get four hundred pages of results when I query “unlocked cell phone” at Amazon, priced from less than $50 to over $700.

Louise and I arrived in Spain with two GSM phones (Nexus models, purchased from Google). We walked into an Orange store (Orange is a dominant cell-phone carrier in Spain, and the Orange store is just two blocks up the street), paid nine euros each, and walked out with Nexus-turned-Spanish phones in our pockets.

The nine euros bought a SIM (Subscriber Identity Module) card with five euros worth of talk time. Louise, always the charmer, even talked the (handsome, young) salesman into installing the card for her. (I, on the other hand, a brother of Frankenstein, was handed my card and hustled out of the store like a beggar.)

When our cards run low, we go online, or visit a tobacco shop, or fiddle with an ATM machine, and charge them back up. We determine the amount. There is no monthly charge. We prepay for our talk time based on our anticipation of need.

(An aside: we opted out of Internet service from Orange. We only use Orange for talk and text. Our phones connect to the Internet via wi-fi, wherever wi-fi is available. We have wi-fi in our apartment and wi-fi is available in pubs and coffee shops all over town.)

In a month, when we arrive in Greece, we plan to again visit a cell-phone shop, again pay a few euros, and again walk out, this time with Greek SIM cards and Greek phone numbers.

Doesn’t that all make sense? It’s so simple: We own our phones, we pay only for the talk time we use, we can refill our accounts in scores of places, and if we want to change carriers — if we move out of the country, for example — all we have to do is get new SIM cards. There is no cancellation fee. This is the way cell phones should be.

That’s my SIM card pictured at the top of this post, with my Spanish phone number printed on it. As Carly Rae says, “Call me, maybe.” I still have eight euros credit on my card, Orange talk time is about three cents a minute, and I’m leaving the country in a month….