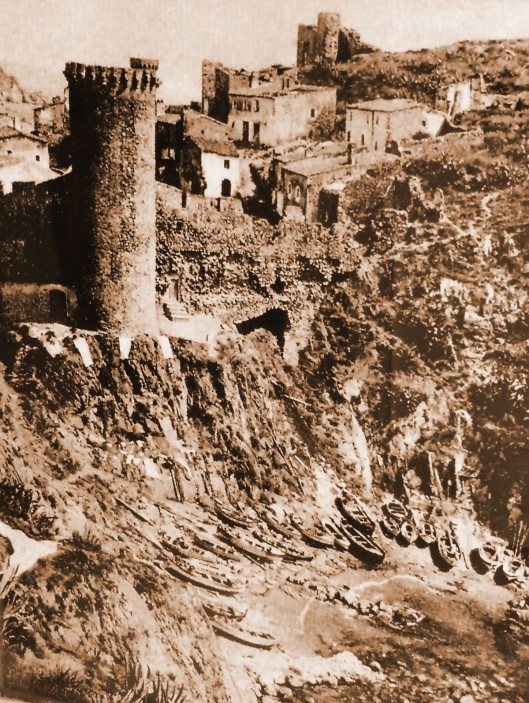 Tossa de Mar has been home for somebody since the Neolithic days, continuously populated through the early Iberians to the Romans … and now we’re only up to 100 BC.

So Vila Vella enceinte, the ancient walled city located within Tossa de Mar and the only fortified medieval town still standing on the coast of Catalonia, is a journey back in time – way back (Vila Vella was built in 1200 BC). On the first summery day of the season, we climbed up the hill with our friends Vicens and Jeannette to wander within and on top of the ancient walls.

Many such fortified villages are empty now, and those that remain are often overly cute (I’m talkin’ to you, Caracasonne!). Vila Vella is a real village within the town, with restaurants, shops, and eighty-five occupied houses within the walls. One can almost peer into living rooms, except the residents knew we would be trying just that, so wisely closed their curtains.

All this time the people of Tossa de Mar have made a living on the harvesting and export of cork. The best hotel in town is the century-old Hotel Diana, a former cork-magnate mansion designed by a disciple of Gaudi. The tourists began to come in the 1950s when Ava Gardner and James Mason made a movie there called “Pandora and the Flying Dutchman.”

And why not? Tossa has a long history, mind-boggling views of the sea, multiple beaches, a thousand places to buy a bikini (not that they’re always worn on the beaches), and so, so much food. Many of the streets of extramural Tossa de Mar are paved with restaurants, bars, patisseries, nightclubs, and coffee shops. Imagine a busy city bazaar, except that every stall is a place to eat. The Tossa Chamber of Commerce counts two hundred restaurants in this town of 6,000 people, but those are just the ones who joined the chamber.

(One other reason to love Tossa de Mar is its policy of non-violence. As proof, in 1989 it became the first place in the world to declare itself an official Anti-Bullfighting City. Bravo to that!)

Vicens, who, like me is an unstoppable menu inspector, finally chose a charming street-side restaurant, where we dined on asparagus in cream sauce, paella, salmon, and a pitcher of sangria.

This was the day I first put my feet in my beloved Mediterranean, which at that spot, on that day, was Coca-Cola bottle green. And it was so clean that I had the feeling liquid glass was washing over me. After decades of testing various seas, that was a first.

Homes within the walls of Vila Vella 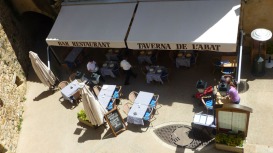 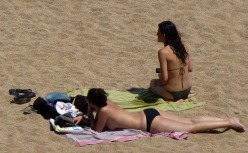 The north beach at Tossa de Mar, with security force

I dip my feet in my beloved Med. (Photo by Vicens Ripol)

Jeanette, Tom, and me with Tossa’s north beach in the background. (Photo by Vicens Ripol)

Tossa from a distance

And so we fell in love with yet another town, and put it on the list of places we’d like to live someday. The list is getting long.