Panorama of Girona taken from the wall’s north tower. Click to enlarge (all photos).

During recorded history, Girona has undergone twenty-five sieges and has been captured seven times. Defending against the bad guys has been the name of the game since the First Century BC, when the Romans began construction of a wall around the city. Over the years the wall was fortified: slots were added to accommodate bows with arrows; towers were built to house heavier artillery; the wall kept getting higher.

On the other side of the ledger, walls limit growth. The population becomes artificially compacted. Walls can collapse under modern fire and become more of a liability than an asset. Consequently, Girona’s wall was partially demolished at the end of the Nineteenth Century.

Then along came tourism. In modern times in medieval Europe, tourists like to see walls. Girona complied and large portions of the wall have been reconstructed. Anyone can walk along the wall: from one end to the other takes about two hours, allowing for lots of stops and photos. The wall is remarkably high in some places and on a sunny day with puffy clouds, the views are beguiling.

We’ve walked the wall before, but today the sun beckoned and the city was quiet. We pretty much had the wall to ourselves – just us and a camera, so we’re able to share it with you.

Today the wall meanders through the city rather than encloses it.

The wall is huge in some places. Note the reclining person below.

It’s an easy walk — once you get up there.

Slots for bows and arrows are spaced about six feet apart.

Really now: you can’t expect soldiers to defend your city all day without a break, can you? 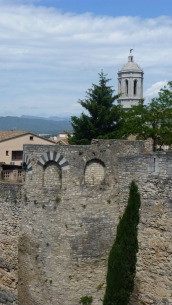 A smaller tower in the foreground is now almost swallowed up by the heightened wall. The Girona Cathedral is in the background.

The wall is straight as a Texan Interstate in some places.

10 thoughts on “Nice Place. Now What Do We Do About the Bad Guys?”