People in Girona often ask us “Why three months in Girona?” True, if we were just visiting landmarks and museums in the city, that would take about three days. While some people travel for art and some for food, we are in it for the people. We stay a long time in order to make relationships that we hope will be enlightening and longstanding. We are curious and communicative by nature and profession; we like to learn about the world through the people that live here. But only if we really like hanging out with them as well. 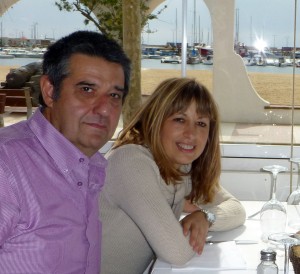 Vicens Ripoll (at left) and Jeanette Breetvelt: landlords and the best Spanish pals ever.

On our very first trip outside Girona city, Jeannette Breetvelt and Vicens Ripoll, our landlords, took us to a town called Pals, a charming medieval village. I explained to them what pals means in English at which point we all threw our arms around each other and said: “Pals!”

We didn’t know then that we really would become pals. They were right there in the hospital every day with Tom and me, bringing smiles and translating what the doctors were saying in rapid Catalan. You’ve already seen that they welcomed him home with a quart of frozen yogurt and bottles of artisan beer, and then threw Tom a birthday party.

We met Simone Nobel and Gabriel Salas at that birthday party. He is a fisherman and she is a translator for various medical businesses. Two days later we got on a train to Barcelona and there was Simone, in the same car, right across the aisle, on her way to the Big City to visit her children. Small world and all that. We talked for an hour and a half about our lives. She offered to take us in her car to visit small villages around the city.

Gerard Stutje (center) and children Gerard Jr. (at left) and Isabel (at right) singing Happy Birthday in a video emailed to Tom. (Photo by Luisa Stutje.)

Gerard Stutje is a Dutch court and police translator that Tom met on the coronary floor at the hospital – a neighbor, lodged in the adjacent room. Tom’s staring into space, bored as a sloth and wired to EKG machines, when this tall handsome blond man in a robe waltzes in and says “Hello!” in English. He sits down to talk, and continues to do so every day until Tom goes home. After that, Gerard invited him to a two-man party in Gerard’s hospital room to watch the F1 race at Circuit de Catalunya. Three days after that, Gerard sent the video pictured above of himself and his children singing happy birthday to Tom. Tom and Gerard exchange emails every couple of days and may do so for a lifetime. 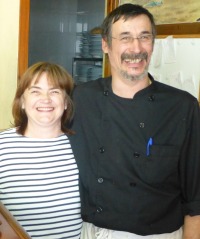 Paula and Josep in their restaurant in L’Escala.

Josep and Paula Ney run a restaurant in our beach town of L’Escala, but we met them at a restaurant in our neighborhood in Girona. She was a British au pair in Spain when she met and married her chef. We are always trying to arrange a get-together but life gets in the way. Last week we were wandering the streets of L’Escala when Paula hailed us from a cafe where she was having coffee with a friend. Again, strange coincidence.

Then she hurried us back to her place, Restaurant l’Escalenc, and fed us an enormous and fabulous lunch of steamed mussels, fideuà (the pasta version of paella), and a bottle of white wine. We got on the bus home wine-logged and garlic-infused. They are wonderful, Paula and Josep. Also the wine and garlic. 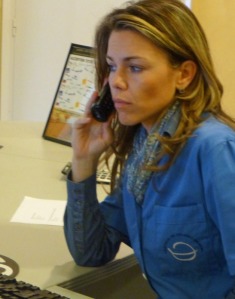 Adriana Bararu Anca manages Jeanette and Vicens’ dental clinic. She is a Romanian lawyer who fell in love with the scion of a Catalan pottery family and moved here eight years ago. She is also drop dead gorgeous. I was told that Adriana, who speaks terrific English as well as Catalan and a few other idioms, could be of help if I needed it. She proceeded to make me a pedicure appointment, fix the television, and demystify my cell phone, and she’s still at it. 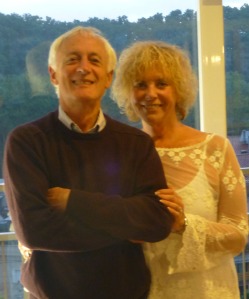 Steve Brown (at left) and me.

Steve Brown heads up Girona Grapevine, our Wednesday morning English-speaking group. Steve made several visits to the hospital while Tom was in, bringing presents such as real Coke, books and magazines, and once a motherboard that Steve had made after I had told him that Tom missed techie talk. Steve moved here from the UK after selling his electronics company because he’s just always loved the general neighborhood. And as a retiree, he suddenly started doing really wonderful watercolors, which he’d never done before. One of his watercolors is featured in this post from earlier in the month.

Moira Cannon is from Scotland; she fell in love with a Catalan man with a bridal shop. They married (what did she wear, I wonder?) and had three children. Now those kids are grown up and moved on, but Moira has been here for fifty years and knows absolutely everything. We boldly asked Steve and Moira over for dinner the other night and they both came, which we consider an honor. We had a high old time, too.

What pulls all these pals together is this European generosity of spirit. We have been almost spooky fortunate that all these fascinating, kind, like-minded people have leapt out of the woodwork to our side, bearing gifts of understanding and laughter. We knew we were lucky with Vicens and Jeannette, but it turns out there is a deep well of wonderful people around here. And if we are lazy about contacting them, we bump into them anyway. Coincidence? We just don’t know.