We depart the Gare de Lyon with all the fanfare of a taxi departing a stoplight. A quiet and really fast taxi. But unlike any taxi I’ve ever known, and even though the Gare de Lyon is Paris’s central train station, we’re out of the city and watching grazing sheep on grassy knolls before we’ve even removed our coats.

We’re on the TGV, as you may have guessed—the French high-speed train. We travel from Paris to the Mediterranean (Montpellier) in a little over three hours—a distance that exceeds 400 miles. There is no perception of speed. Rather than a blur, the landscape seems to mosey by. People sleep, have quiet conversations, pay no attention to the astonishing numbers displayed over their heads. The quiet, the calm, the casual—they’re almost a disappointment to a train guy like me.

At Montpellier we turn South, and in another couple of hours we arrive in Girona, our destination. A cab drops us off at our hotel and…

… we tumble down the rabbit hole.

Our hotel is named Girona Llegendes. It’s a quite modern structure built on a site of ancient Girona history. One legend, for example, has it that Saint Narcisse, while escaping invading Romans, walked backwards from the window he had shimmied out of, thereby misleading the interlopers into believing he was still in the house and buying him enough time to escape. A huge cast of his toe-then-heel foot graces the patio to prove the point. 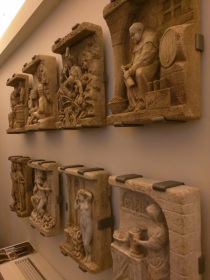 However, if one is to go by the hotel’s website, the “legends” of Girona Llegendes seem to be a veneer. While there are plenty of bas relief hangings depicting legends scattered about, the spirit of the place reflects the libido of Don Juan.

Take the bathroom, for example. In our room, frosted glass takes the place of interior walls. Anyone taking a shower conducts an exhibition worthy of cinematic acclaim. If we were fifty years younger it might be titillating, but at our age it’s more Psycho than sexual.

And the lighting: Built into each bedside table is an elaborate panel that not only controls every light fixture on the room, but also the motorized curtains, à la Hugh Hefner. Settings include “Love,” “Romance,” “Eros,” and “Passion.” It’s a provocative temptation, but we were hoping for something more akin to “Large Print.”

Bathroom in our room 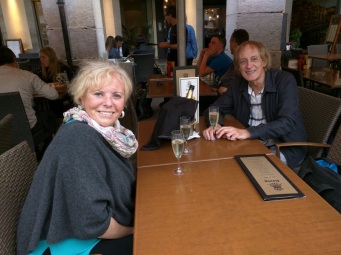 While the hotel is something of a sybaritic romp through a garden of hedonism, we appreciated the friendly staff and the excellent breakfasts. More importantly, we thoroughly enjoyed our visits with old friends—people who held our hands so graciously three years ago when I was unexpectedly hospitalized in Girona for brain surgery. That’s why we made the trip, although a fling on the Eros Couch might’ve been enlightening.

So there you have it: a somewhat paradoxical but altogether rewarding return to Girona, Spain—a city I love almost as much as my native Portland.

And you thought this was going to be another tedious post about a train.

6 thoughts on “The Garden of Hedon(ism)”