Looking down the Cours la Reine from atop the wheel at the Tuileries. The Eiffel Tower is on the left, the River Seine, the Grand Palais (glass roof), and on the far right, at the end of the Champs de Élysées, the Arc de Triomphe.

To be in Paris for a month with no plans is something like gazing over a 26,000-acre box of chocolates. You won’t get to them all, but no matter where you start and where you go, it’s going to be delicious.

We’ll admit our first few days were more about sleep, eat, sneeze, nap, eat, and sleep again, dodging some serious raindrops between neighborhood restaurants. But finally as soon as the calendar flipped to April, the sun came out and so did we. 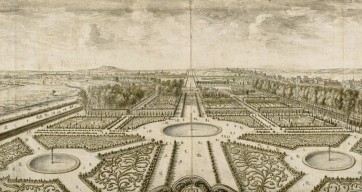 Design of the Tuileries  from Gardens of Illusion by F. Hamilton Hazelhurst, drawing by Israel Silvestre.

Tom declared the first adventure to be: the Tuileries Gardens. More a park than a garden, the Tuileries (named after the tile-making shops that used to be there—in Old French, tieule means “tile”) was first laid out by Catherine de Medici in 1564 when she moved to the Louvre palace with her son, the new king Henry II. As the years rolled on, a series of rulers redesigned the front yard, needless to say.

There are hedges and follies, ponds and statues of naked gods and goddesses. Napoleon planted a little Triumphal Arch there to celebrate his victory at Austerlitz, and also his wonderful self in general. The newest addition is the giant Roue de Paris, a Ferris wheel 200 feet in diameter, built in the year 2000 for the millennial celebration.

We paid our ten-euro fare and got into a glass carriage with a mother and daughter from London. Though the height of the thing looked terrifying from the ground, the snail pace of the turning wheel made it all easy. The view of the city from there was prime. We were still lower than the Eiffel Tower, but face-to-face with Sacre-Coeur in Montmartre. The full symmetry of the Tuileries unrolled before us on one side, and on the other, the length of the Champs Élysées (see the lead photo for this post).

I did not know at the time that the 365-ton wheel is portable, and is grounded by gigantic tanks of water, not a series of concrete pillars. It didn’t spring a leak. We survived.

Tom basking in the bistro, post-lunch.

We found the day had warmed a bit more, and Parisians were beginning to flood the park. We walked back through the garden, and had lunch at a park cafe, where each table was equipped with a red blanket to ward off any remaining March chill.

And we engaged in our favorite sport: watching the chic Parisians in their scarves and high heeled boots, their big-patterned coats, and their muted colors which always blend seamlessly. Passels of school children on field trips, wearing matching flouresent backpacks and holding hands.

Mothers with strollers paused for a coffee, and beautiful middle-aged women exchanged gossip over cigarettes and wine. Old men talked politics. Young couples made a beer last forever, while holding hands and teasing. It was Friday afternoon, and there was that Friday-afternoon feeling, a kind of sweet, slow buildup to le weekend.

That Friday-afternoon feeling. The Louvre appears in the background.

It was all essential Paris. Though we have sat at outdoor cafes around Europe and America, there is not and cannot be anything like this. It’s so good to be here!