Of our 821 regular readers, about 800 of you totally ignored my birthday Saturday. Regardless, being old and creaky has not diminished my interest in celebrations, although the actual number is irrelevant. 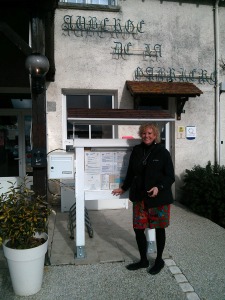 In front of Auberge de la Gabardiere, ready for a feast

Still, the Perfect Man did not forget. It was a challenge for Tom, though. We live in a town with no stores that might produce a present, unless it were a baguette or some carrots. We have not yet found a truly nifty French restaurant that is actually open in January. A bunch of flowers is a twenty-minute drive.

But the resourceful Tom found a way. He emailed the people we had met at the Fisher’s hello-goodbye lunch, and with minimum fuss pulled together a lunch party. Our new friends Stephen and Kay Lord knew a place, and took along their daughter Becky, visiting from Germany, to surprise me.

The Auberge de la Gabardiere sits on a beautiful privately-owned lake, which, we’re told, buzzes with activity in the summer. In another room, a passel of men toasted each other and sang drinking songs. A great cocotte of blanquette de veau later, we polished off a bottle of Chinon Rosé and then the most amazing ice cream desserts. Becky experimented with the oak-flavored ice cream, (saveur boisee) and gave us all a bite. (The verdict: oak trees are best climbed rather than eaten.)

After lunch, we strolled by the lake and admired the real estate, including the smashing country house of ex-President Pompidou’s nephew. Then we popped in on some Scottish friends of the Lords’, Christine and Allan, who are redoing a 400-year-old cottage in the village. The ceiling beams grazed the top of our heads, and the interior was all done in white and tan, as was the cat, named Sandy. The whole place was straight out of those venerable Laura Ashley Home catalogs, without the little flower prints.

Tom and Christine in her spectacular kitchen

Hooray for the Perfect Man, the amiable Lords, the welcoming Scots, and the 21 of you who remembered my birthday. The rest of you: January 17.

9 thoughts on “A Little Guilt Trip”