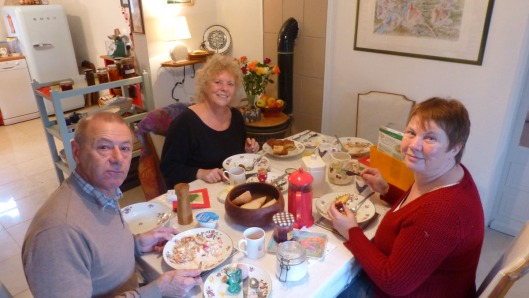 We are in our very French kitchen, having breakfast after a whirlwind orientation from the delightful John and Jackie Fisher, our British hosts who are bravely entrusting their house and critters to us.

Our orientation activities included putting diesel fuel in the shooting brake, providing the goats with broken carrots and goat feed, finding the cat, and running the washing machine (we already knew how to run the clothesline). We have learned to toy with the thermostat, sleep with a hot water bottle (divine!), buy a baguette, unleash a grocery cart from its storage spot, open the attic door, weigh vegetables at the market, and tune into British TV.

At the same time, Jackie, who is an amazing cook, kept plying us with meals. A meal she called “fish” was actually a salmon en croute, that is, wrapped in a luscious puff pastry, served with mashed potatoes, carrots, and a homemade plum sauce on ice cream.

(Below: A gallery of random photos from around the farm. Click any one to enlarge and display the captions.)

The French TGV, which whisked us from Paris to the country 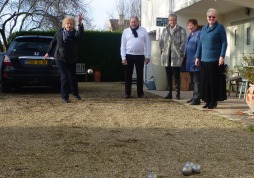 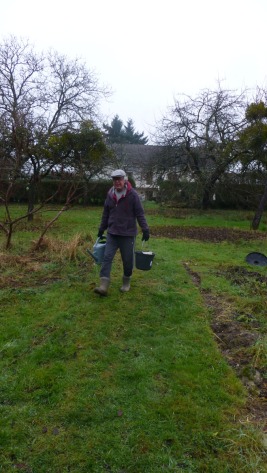 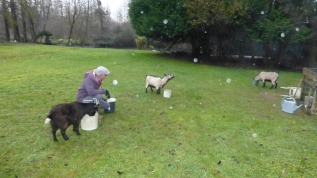 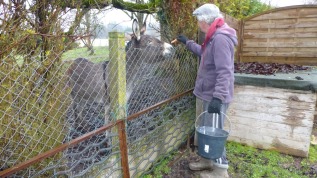 Miss Violette gets a treat 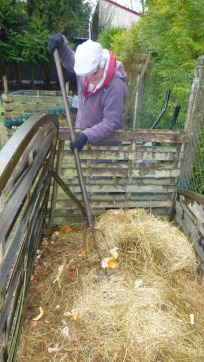 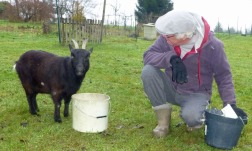 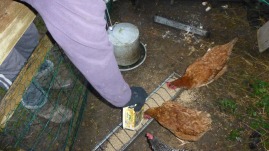 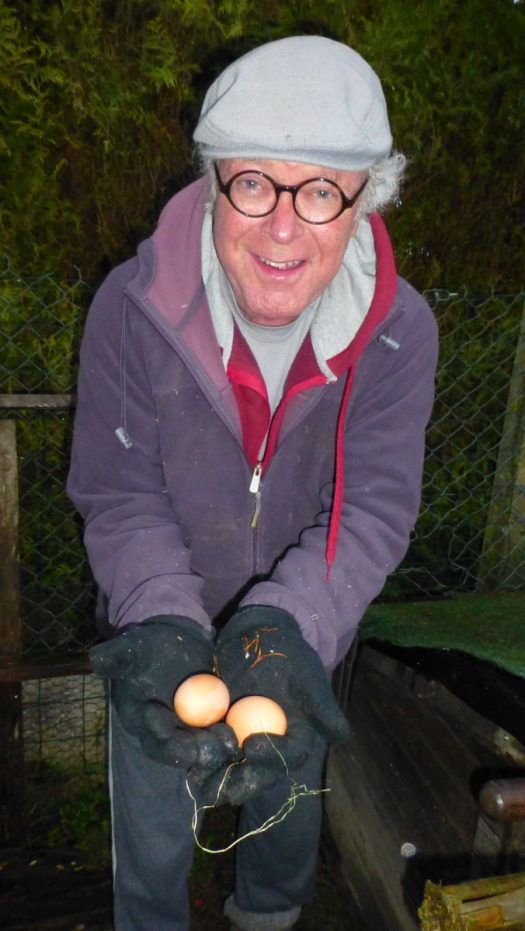 As though we weren’t enough trouble ourselves, John and Jackie invited four more British expat friends over for a festive goodbye/hello lunch. Steve, Kay, Terry and Maureen are assigned to take care of us as we take care of the goats. I fear—and sort of hope—that they will be a very bad influence. Bottles of wine and beer, chips, fresh walnuts and chevre on endive leaves with honey mustard dressing, and a beef and lentil stew topped with mashed potatoes and melted butter, then broiled. A cheese course followed, and then a ginger-crusted cheesecake slathered in thick whipped cream.

Though barely able to stand, we staggered outside to the gravel patio for a lively game of boules, our first. We needed a lesson to edge us into French rural society. (There’s a men’s game every Wednesday, and a coed game on weekends, followed by drinks.) The women’s team had a healthy lead all the way before letting the men win at the very end. In the evening, after the five-hour lunch, we watched John and Jackie racing around packing for their own three-month sojourn in the UK, an exercise reminiscent of what we ourselves have just finished doing in the U.S.

Having pronounced ourselves Jeopardy aficionados, we were excited to watch University Challenge, a British TV show in which two teams (this time from Oxford and Cambridge) bump brilliant brains to answer wildly obscure questions and win money. We were absolutely awful at this game. John, being a former English and drama teacher, got quite a few right. We were handicapped, we claimed, by not understanding rapid British English that well. It hadn’t occurred to us that the British shout slowly at us, using simple words, as they would at the Greeks or the deaf.

We took our hot water bottles to bed and got up Tuesday to hug our new friends good-bye. They seemed confident, perhaps wrongly so, that we could handle it all. “We love this house because we have fun here,” John told me over his muesli, “and we love sharing it with other people who have fun here. And now you will have fun here and probably come back, and will have entered into the spirit of the house forever.”

I didn’t know whether to cry or sleep, so I did both, in that order.