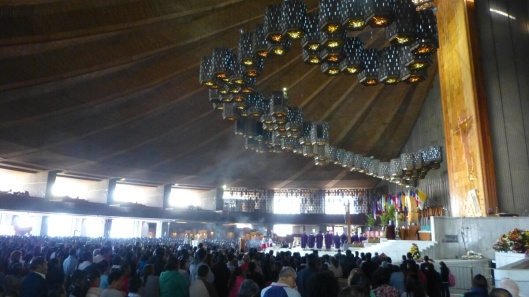 You want to be bored? Let me tell you how many ways I’ve tried to fix the right shoulder that has been hurting me for six years.

What joy, then, when I found a milagro charm shaped like an arm at the Metropolitan Cathedral in Mexico City. These little tin charms, shaped like legs or babies or hearts, are used to send prayers upwards in search of cures. (Frida Kahlo made a whole necklace of leg milagros.) I gave a little donation for my little arm and stuck it on a prayer board with a safety pin. Then I sent a general prayer Upwards. 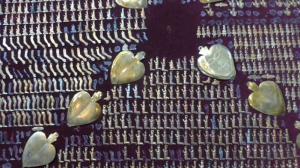 This is another installment in a series of posts describing the exceptional tour of Mexico City we took last week with Superior Tours Vallarta. Our guide Vicky told us we were supposed to pray to the appropriate saint, but my saint-search found no saint interested in arms or shoulders. Leprosy, leukemia, legs, and even OCD were covered by saints, but not the deltoid ligament. 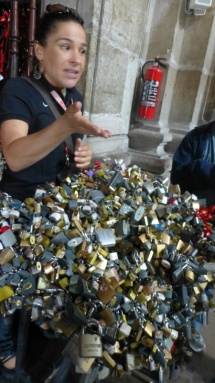 Our guide Vicky explains the meaning of thousands of Nonato padlocks.

On the other hand, St. Ramon Nonato in a nearby chapel was in charge of something way cool, namely gossip-stopping. In front of his imposing statue, a rack was mounded with intertwined padlocks, each with a message asking the saint to stop the nasty rumors going around. From the number and heft of them, I could only picture a city of 27 million paranoiacs.

Otherwise, the interior of the 500-year-old, whole-city-block cathedral was stunning. Much of it was done in the churrigueresque style (named for Spanish architect José Churriguera) which means no space is left undecorated, sort of like our refrigerator just before I clean it.

Part of the fun is that the whole place has slanted floors because Mexico City is slowly sinking, a phenom that Tom has offered to explain in a future blog entry. Pilgrims were stumbling off balance everywhere.

Speaking of pilgrims, we also explored the Basilica of our Lady of Guadelupe, which attracts more visitors than any shrine in the world. She is the dominant patron saint of Mexico, and even the country’s four non-Catholics are fans. The campus of the shrine has an electric air; there is so much belief, so much desire, so much prayer that one can actually feel the power. 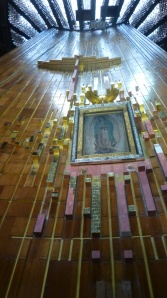 The shroud of Our Lady of Guadalupe

Our Lady of Guadalupe appeared to an Indian peasant in 1521 and gave him a mantel with her image imprinted on it. Likenesses of this image are everywhere in Mexico, but the original mantel is on display behind bulletproof glass within the modern arena-like basilica, where 10,000 people can attend mass at the same time. And we saw them do it (see the picture at the top of this post — mass for ten thousand!).

To see the original, exhibited behind bulletproof glass, one steps on a moving sidewalk and glides by the exhibit. The moving sidewalk eliminates monopolizing of prime viewing space, but you can walk back to the beginning and hop in the sidewalk as often as desired. Outside the modern basilica, pilgrims are marching in from everywhere, some on their knees. There is a large plaza and, on one side, the old basilica which is wildly ornate and also sinking slowly into the ground, and at an angle.

After stumbling on a patch of uneven floor, I bought two little candles. In accordance with local tradition, I rubbed a candle on Tom’s unpredictable heart and he rubbed one on my recalcitrant shoulder. We lit them both and left them to pray.

Now, my shoulder feels a little bit better. Is it a miraculous response? I don’t know. I do know that you don’t have to believe in miracles to give one a try. It’s called Casting a Big Net.

7 thoughts on “The Miracle Stalker”