“I was born a bitch,” Frida Kahlo used to say. The folk/surrealist artist has long been revered in Mexico for her art, her brash behavior, her dismal life story, and her legion of lovers. We visited the Casa Azul, where she was born in 1907 and used as home base, in the old and beautiful neighborhood of Coyoacan, now a part of Mexico City. 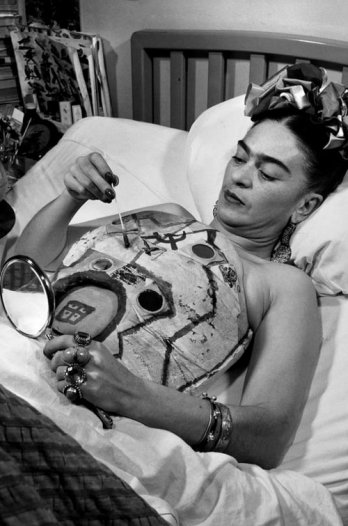 Frida paints her own body cast with the aid of a hand mirror.

After surviving polio at the age of six, Frida became a tomboy and a glutton for life and love, only to be struck down, at the age of eighteen, by a bus accident. Practically splintered, in a body cast, she began to paint the cast (now on view) until her parents bought her canvases. Then, all the pain went onto the canvas; in one self-portrait after another, she is pierced with thorns, bleeding, naked, corseted, and crying.

Many of Frida’s paintings were painted while she was bedridden

In the years to come, she would walk, dance, and make love with her husband, the muralist Diego Rivera, as well as Georgia O’Keefe, Leon Trotsky, Anais Nin, Josephine Baker, and who knows who else. In between there would be bouts of pain and surgeries.

What is inside the Casa Azul? Her colorful, often creepy artwork, but a surprising number of fruit and flower still-lifes as well. Her enormous light-filled studio, with wheelchair and easel. Her nighttime bedroom with the original little bottles of mysterious liquid drugs, and a wooden skeleton on the panel above her bed, created because she was always haunted by death. In the daytime bedroom, for days when she couldn’t get up, there was a mirror to facilitate each of her 55 self-portraits.

Diego and Frida entertained famous artists and Communists around the rustic table in the center of the L-shaped house. In the adjacent kitchen, the cook whipped up wonderful things on a woodstove. Frida died in 1954, and Diego in 1957, but this kitchen looks like it has never seen the ’50s. It is paved in stone, with pottery everywhere.

The temporary exhibit was a display of some of Frida’s clothes, corsets, and accessories. They are indigenous Oaxacan in origin, having nothing to do with what other women were wearing at the time, and they were probably Frida’s best marketing tool.

The loose blouses were to float over her leather corsets (also on view), which supported her broken spine. The long skirts were to cover her one spindly leg, which was eventually amputated vat the knee. Another accessory: a false leg wearing a red wedge boot with a panel of embroidered Chinese silk, and elsewhere, the matching boot. And oddest of all, a pair of gold-colored wing-tipped sunglasses, like Marilyn Monroe’s. It was intriguing, and almost holy.

Rivera mural at the National Palace in Mexico City

Diego Rivera, being a muralist, did his work onsite. The ones we saw were at the National Palace, an ornate building two football fields long, built on the site of the old Aztec leader’s office pyramid, and with the very same stones. The Spaniards rebuilt it as a palace in the 1500s and it has been destroyed and refurbished a few times, but Moctezuma’s stones are still there.

Diego Rivera spent six years painting the enormous stairway murals that depict the history of Mexico, from the early tribes to the Spanish Invasion to the many fights for independence, to a future that he hoped would include Marxist principles that would re-glorify the persecuted Indians, and make the Spaniards and their priests look like butchers. There is blood and gore, yes, but also bright colors, sweet pastels and small details, dogs and babies tucked here and there, and the actual faces of every important Mexican leader, revolutionary, priest, dictator, president, viceroy, emperor, god, and goddess, good or bad. Our guide, Vicky Rodriguez Merlevede from Superior Tours Vallarta, spent twenty minutes explaining it, but also wisely left us free time to ponder. It could take days to really see it all.

In his human presence, Diego Rivera was a bit dark (and as promiscuous as his wife), but his murals are playful and joyous when they’re not being violent. Frida’s pain was in paint; in real life she knew not to whine socially about her constant aches.

When her left leg was amputated in 1954, she wrote: “Why do I need a leg, when I have wings to fly?” A bitch, maybe, but a tough-minded optimist as well.