(The beach at Boca de Tomatlan. Click to enlarge)

As in real life, which this is not, sometimes we set out to have a certain adventure, and then we have another adventure instead, which is probably better than the adventure we didn’t have. So it was with our trip south to the coastal village of Mismaloya. We didn’t know much about Mismaloya, including where to get off the bus.

After almost enough research, we jumped on the Mismaloya bus from downtown, and were suddenly lifted above the glam/grimy town of Puerto Vallarta into the hills above, which was paved with white condo buildings, trimmed in shiny mahogany with flowers dripping off every balcony. They were all fitted into the hill like a Tetrus game. As we rose higher, we saw the Bahia de Banderas off on the right, getting smaller and smaller. People got off at resort hotels along the way, heading for Sunday brunch.

The bus rattled along up and up, around the shore, above the rocks, through the jungle. We saw lovely hotels and an  overgrown lot with a big faded chipped abused sign that said “Night of the Iguana. Keep Out.” (This was the abandoned set of the John Huston movie of the same name, the site of Liz and Dick’s most famous entanglement. Vallartenses insist it was the making of the tourist boom.)

The bus kept going and finally lurched to a stop on a rocky byway, where everybody got out. End of the line.

“Is this where you mean to be?” asked a nice Mexican man in a Cancun teeshirt. “I’m not sure,” I said. “We were headed for Mismaloya.” “Oh, you missed that,” he said. “But here you are in Boca de Tomatlan, which is a fishing village of eight hundred people and a nice beach. I will walk you down to my restaurant, if you like.“

As in real life, which this is not, we figured we were put here for a reason, so we followed Raul, for that was his name, down 110 steps into a one-street town. He explained that besides the locals, Boca was populated by stateside and Canadian visitors who don’t like excitement.

One hundred and ten steps

In three minutes we were at the small beach and Raul handed us over to his barefoot headwaiter. We shuffled through the sand to a waterside table where the Rio Tomatlan met the Bahia de Banderas. From here we watched the doings of Boca’s principle industry: water taxis. They leave from here for nearby Yelapa, which has no roads, and to Los Arcos rocks, and anywhere else you want to go.

The beach at Boca

The water taxis are stored in a little river harbor, upriver from the bay. When needed, the drivers float them downstream to the sea, guiding them through clusters of small dogs and children (pictured at the top of this post). On the way back, the drivers employ the children and small dogs to push the boats back to the harbor, against the current.

After a beer and nachos, we wandered along a charming riverside path, where we heard someone behind us say, essentially, “Psssst!  Want to see my B ‘n B?”

There was a fine looking man from Baltimore named Bob Berndt. Bob and his wife Sue bought a fabulous old stone house in the jungle three years ago when it was still crawling with snakes. He showed us the four pristine suites, elegantly tiled, well-kitchened, comfy-bedded that make up what is now the Casa de Piedra. Of course they spent a bazillion hours getting it all snake-free and shiny and now it was protected by his three sand-colored dogs. 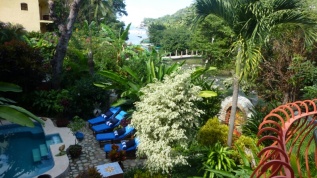 We loved the place and promised to return. I checked out the shopping (one used clothing store, one shoe store, one produce stand), said hello to a trio of retired fighting cocks, and we climbed the 110 steps back up to the bus stop.

In real life, which this is not, a traveling companion might have said things like, “Whaddya mean, we missed Mismaloya?” Or “We’re lost! Now what?” Or “Did it occur to you to ASK someone where to get off the bus?” It didn’t happen.

5 thoughts on “The Accidental Tourists”