To prove what a great husband he is, Tom booked us on a tour to Guadalajara, the second largest city in Mexico. It wasn’t just any tour, though, it was a shopping tour, and I saw more different kinds of stimulating marketplaces in three days than ever in my long life as a black-belt agoraphiliac.

Astrid Van Dam, a vivacious, affable, and knowledgeable founding partner of Vallarta’s Superior Tours, led our tour herself because she needed to go shopping anyway. There were just two other people with us: Jim Zimmerman and Yoi Stewart, who happened to be from Portland.

Astrid knows the business. Bring snacks, stop every two hours, and keep the men happy by making a first stop at Herradura Tequila Hacienda. This was a well-preserved feudal farm from 1870, where the blue agave is grown, the tequila is fermented, distilled, and then bottled. (See this entry about a tequila distillery of a different kind.) The 90-minute tour was followed by four semi-shots of the finished product. (Click on any picture to enlarge.) 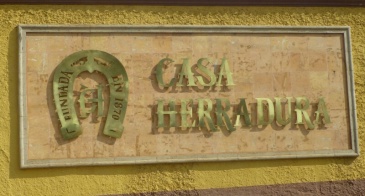 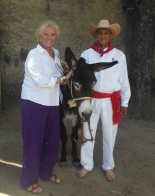 I made lots of friends at Herradura Tequila Hacienda

The distillery as it appeared in 1870

Jim, Yoi, and me sampling the wares

Astrid then drove us on to the small, Spanish colonial village of Tlaquepaque, now surrounded by the big city of Guadalajara (known as GDL). The village (don’t make me spell it again), where natives were making pottery even before the Spanish arrived in the 1530s, is now comprised of 19th century mansions on each side of a broad street, each house enclosing a courtyard, with arcades and a fountain and a pots of flowers. Some 300 boutiques sell fancy artisanal goodies at mostly fancy prices. The Mexicans love their blown glass, their pottery, tin sculptures, their Day of the Dead figures, and their hand-embroidered textiles.

Me, Astrid, and Tom

We dined that night in GDL at La Fonda de San MIguel, in a former convent (courtyard, cloister arches) where, Astrid told us, ghostly voices float in the night at closing time.

The next day we toured the historic center, while Astrid gave us a very concise history of Mexico and its constant bloody struggles against Spain, France, Texas, and itself. It is very easy to confuse the enormous number of Mexican heroes, so I will skip that part and get back to shopping. 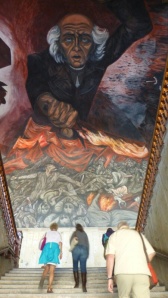 Astrid pointed out a covered three-story downtown market, called San Juan de Dios, with nearly 2980 stalls in 40,000 square feet, selling everything from rabbits to radios. It was Saturday, and the building was crammed with shoppers in its narrow alleyways of damp concrete. We only needed to glance at the 250 stalls selling only jeans, and the 40 selling only watches, and the food court with its scent of spice and tripe, to know that we were….outta there.

But that night! As the Mexicans like to say, “WAOW!”  We hit the Andares Mall, representing  the upscale Mexico most tourists don’t get to see. Mercedes, Jaguars, BMWs, and Range Rovers all jockeyed to park for an evening of conspicuous consumption at  Coach, Burberry, Hugo Boss, Calvin Klein, and even PF Chang’s. It also has just about every fancy chain store we hadn’t seen since Spain. “Wealthy Mexicans,” explained Astrid, “do not like to buy Mexican goods. They prefer European or American.” The mall is five years old, and cost over half a billion dollars to build. 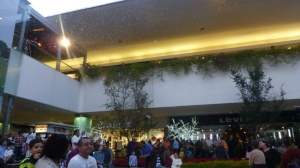 Andares Mall is so big that we could not see it all, even from the outside. Every hour of every day in December, the sky spews actual snow on delighted designer-clad children and their beautiful mothers with expensive hair.

The next day, we arrived at my favorite hunting ground, Tonala, also within the larger city, which has been a ceramics market since before 1400. Here Astrid suggested we buy copies of all the really serious crafts we had seen in Tlaqueplaque. Acres of tents and stalls sold pine furniture, every kind of ceramic, kitchen utensils, dried grasses, and more blown glass, all of it incredibly cheap. It was copyright-violation heaven, too, featuring bold motifs of Barbie and Buzz Lightyear and Louis Vuitton.

In downtown Tequila, the center of the eponymous industry, we learned that in the year 1755, the local archbishop laid down a law excommunicating anyone engaged in the manufacture, sale, or consumption of liquor. It has been always ignored, and never repealed.

Tired and shopped out (temporarily), we made our way back to the van for the last stretch of the trip back to Puerto Vallarta. “Now is the time we nap,” said Astrid, hoping that we would. But we didn’t. You can’t sleep after five enormous stimulating marketplaces slammed into one weekend. You have to keep thinking of what you bought, what you didn’t buy, what you saw, what you want to copy, how expensive/cheap it all was, and whether any of it would look good in the States.

Post-shopping adrenaline is a well known phenom, and it often involves trying things on, installing batteries, washing pottery, and visualizing possible uses for everything. At last we fell into our lounge chairs by the sea. We shopped; we dropped. Isn’t that what life is all about?