The best Mexican tourist-fleecing operation is not the timeshare industry, it’s not the machine-carved wooden dolphins sold by beach vendors (“my family make them here!”), it’s small-scale tequila distilleries. And I say that with high praise.

Hacienda Don Lalin distills tequila high in the Sierra Madre mountains, a two-hour bouncy tour-bus ride from Puerto Vallarta. The distillery is about the size of an American suburban patio. The tequila is ambrosial.

When we signed up for our tour, I anticipated a casual stroll among blue agave plants in a field like this:

A blue agave field in the Sierra Madre of Mexico

I expected to see hundreds of blue agave piñas (pineapples) harvested in the fields, their leaves and stems removed, ready to be packed aboard trucks and hauled to the distillery:

And I expected a distillery the size of Ford truck plant, with thousands of workers and millions of bottles of tequila, ready for shipment:

What I got was our host (and distiller) Lalo, bless his humble Mexican heart, his small patio, and a couple dozen bottles of tequila, ready for our purchase at twenty-five dollars each. 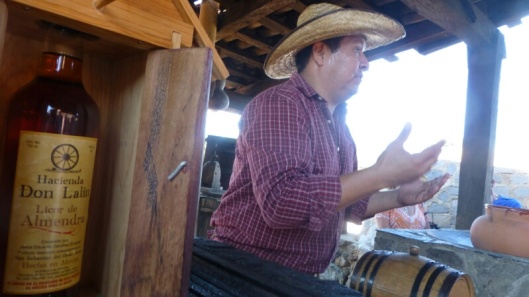 Lalo entertains us with tequila and tall tales

I suppose the word “fleecing” has unintended connotations. Lalo didn’t steal our money. He wasn’t running a scam. He makes great tequila and sells it directly to gringos, via a sweetheart deal he has made with the tour-bus company. Thirty thirsty gringos step off the tour bus after two dusty hours on mountain roads. Lalo pours ample tequila tastes for everyone, tells charming tequila stories, pours more tastes, tells more stories, pours even more tastes, then steps behind the sales counter and brings out the cash box. He has a captive audience. He alone is the manufacturer, the distributor and the retailer. The entire process, from blue agave piña to $25 in Lalo’s pocket, is done right there in his patio.

Lalo buys his piñas from commercial growers. No expensive real estate required. No field crews. He puts half a dozen piñas in his wood-fired oven and cooks them until the juices begin to flow:

Lalo cooks the piñas in this oven

He then shreds the piñas and dumps the pulp into 55-gallon drums, where the soggy mess ferments. What comes out of the drums is the wort, just like beer, and like beer, it’s about five percent alcohol.

The cooked and shredded piñas, ready for fermentation

Lalo builds another wood fire — in a rickety still this time — heats the wort, and condenses the evaporated alcohol. I watched this part of the process and what emerged was what Lalo called “white lightning,” and white lightning it was, measuring about 180 proof, or 90% alcohol. This is the stuff that boils off just after the distillation process begins. It could be lethal. It does not become tequila.

The white lightning is poured off and discarded

The liquid that boils off during the next couple of hours measures about 20% alcohol. There’s no doubt it’s tequila, but it’s far too sweet and there are few alcoholic complexities. So Lalo distills it again, in a fancy stainless-steel apparatus, making more white lightning and, eventually, white (or “silver”) tequila measuring about 40% alcohol.

A second distillation happens in here

Lalo pours the silver tequila into oak barrels and lets it rest for a couple of months (tequila “reposado” — rested tequila), pours it into bottles (again, right there in his patio), glues on his label, and waits for the next bus.

Louise and I bought three bottles, including infusions of almond (“great over ice cream”) and mandarin oranges. We will drink them with fond memories of Hacienda Don Lalin and Lalo’s patio-sized distillery high in the Sierra Madres. We were fleeced and we happily gave up our wool.

27 thoughts on “We Were Fleeced”