At the turn of the century (1900), Bare Mountain (Muntanya Pelada) overlooking Barcelona seemed like an ideal place for a housing development. It was high enough to offer air clear of the soot from Barcelona’s industry, it sported a panoramic view of the city, and its height almost guaranteed exclusivity for the Spanish elite. Count Eusebi Güell – an industrial entrepreneur who profited greatly from the industry from which Bare Mountain offered a respite – platted sixty huge triangular lots, hired the Catalan architect Antoni Gaudí, built a model home, and sat back, waiting for orders. None came.

Why? Well, Gaudí’s architecture wasn’t universally admired by the elite back in the early 1900s. Eventually Gaudí bought the model home (the only sale!), moved in, and began construction of a forty-acre municipal park in place of the housing development. The park was completed in 1914 and it’s just as wacky as any of Gaudí’s other constructions, all of which resemble something Walt Disney might have built after too many drinks with Micky and Goofy.

Park Güell still stands today, atop Bare Mountain overlooking Barcelona, and if you take the Metro there as we did, a sweaty hike to the top of the mountain is required. Sybil, Louise, and I arrived at the entrance to the park bone-weary and confounded by the crowds and the architecture. It’s a bit like touring a wax museum or negotiating a New York subway: boisterous, bizarre, and baroque.

Reportedly Gaudí once said to Güell, “Sometimes I think we are the only people who like this architecture.” Güell replied, “I don’t like your architecture; I respect it.”

Houses seen from above 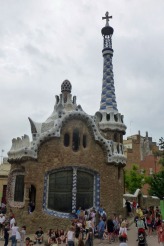 12 thoughts on “If You Build It They Won’t Come”