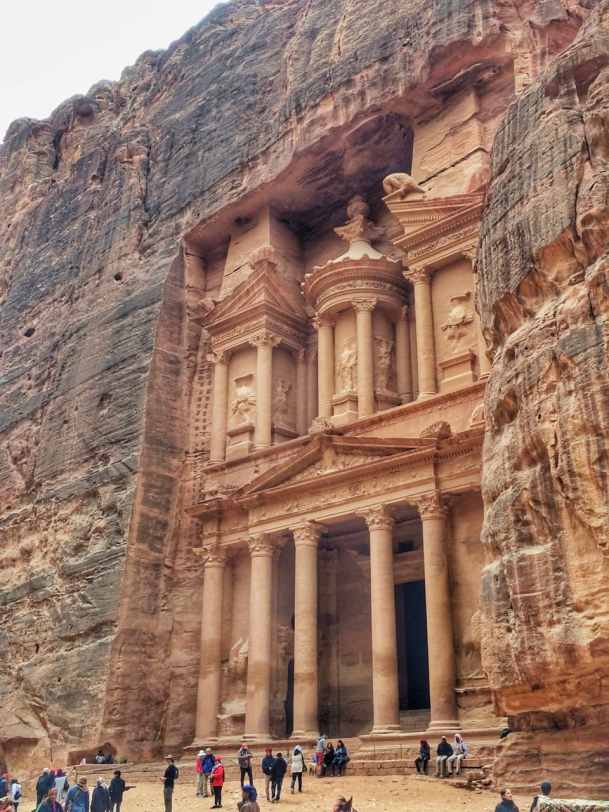 The Treasury in Petra

People speak of Petra as though it were Oz: the source of all amazement, the end of the rainbow, the most/least obscure/impressive man-made monument in the Middle East, one of the Seven Wonders of the World.

But what a grand strange thing to see! Settled around 400 BC by Bedouins who were tired of moving and being parched, it once had an impressive rainwater harvesting system that enabled civilized life in the desert. The Nabateans had established it as a trading town catering to caravans of camels, and it peaked about 100 AD with 20,000 residents.

The town was carved with ivory blades and metal hammers out of splendidly layered and colored sandstone bluffs. Some of the tombs and the Treasury building are done in fine detail, echoing the most delicate of Greek and Roman motifs. (The Greek and Roman traders passing through must have brought photos—er, sketches?—of Corinthian and Doric columns.)

After paying the $70 entrance fee, we walked a mile through a narrow passageway with looming walls. The soft stone of Petra is in multicolored strata of rose, peach, white, beige and even blue. Suddenly, a clearing appeared, dominated by a columned facade 131 feet tall, attached to the cliff behind it. This is the Treasury, the symbol of Petra (pictured above). Actually a tomb, it is a facade for four empty rooms. 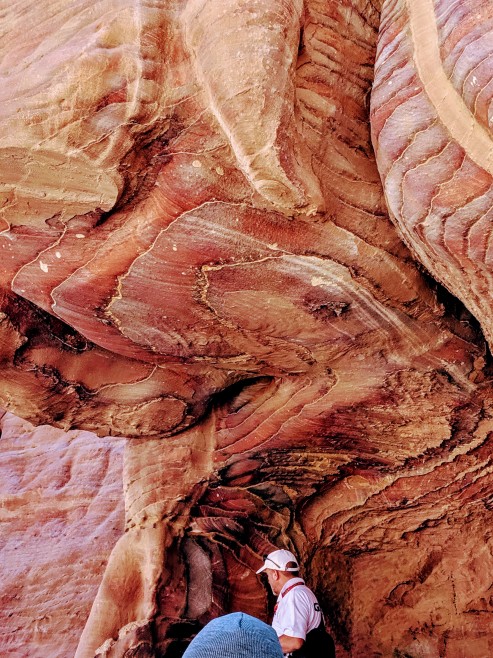 Hazan tours us through a Petra Cave

Most visitors stop here, and maybe take a three-minute camel ride, buy some souvenirs, and go back to the entrance. We walked all two and a half miles to the end of the road, where stunning but less magnificent edifices—tombs, residential caves—lined streets of outdoor table shops.

Our witty and diplomatic guide Hazan had warned us that in Petra we would be pestered by vendors of postcards, Bedouin jewelry, hats, sunglasses, and kohl. “They are persistent, but if you just say no, they will move on. If you even pretend to look interested they will follow you.” Then he added: “these vendors are all the same, but sometimes I will tell you out loud that a particular one is honest, or a nice guy, or brilliant artisan. This I have to do because I come here and see these same people every day. Do not pay attention to me at all.”

“Halloo!” Hazan gripped the hand of a straw vendor and turned to us. “This man has the best hats.” Man nods and smiles. A half hour later, a boy approaches us, yelling “One dollar! One dollar!” Zahan tells us that’s a good price for ten postcards. Later, he hugs the owner of a cafe, saying, “you can trust this guy!” It was one of the kindest things I’ve ever seen.

Many of the vendors, especially the young boys, have their eyes lined in kohl, like Johnny Depp in Pirates of the Caribbean. It’s a good look. We all bought some. 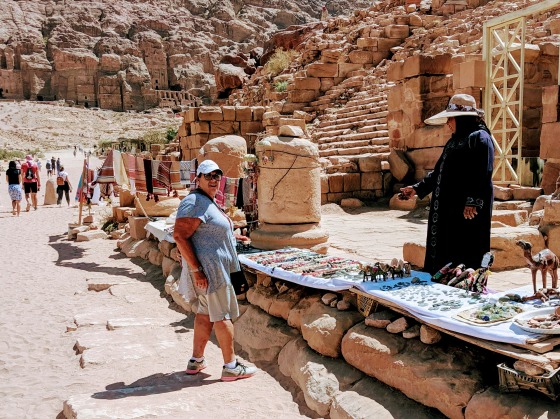 Speaking of shopping, in both Israel and Jordan we were advised to bargain, “If you don’t,” said Hazan, “it’s no fun for the sellers at all.” Bargaining is not fun for me, even when a $300 item gets whittled down to $40. Rather than feeling victorious, I felt sure that it’s worth maybe $10.

Still speaking of shopping, there is one particular craft that is unique to Petra: sand bottle art (click link for a video demonstration). Colored stone is ground into sand and layered in bottles by local craftsmen. Camels, suns, flowers, and dunes appear in the natural colors of Petra, the sand carefully herded this way and that to create designs.

And so, one can bring a bit of Petra home. And water from the Jordan River. Also water from Abraham’s rock. There is jewelry made from crushed Roman Empire bottles found underground. There are ancient coins to be had naked, or mounted into jewelry. I bought a necklace that allegedly contained lapis lazuli, but it could have been clay.

Do we know for sure if any of this is real? Like the Velveteen Rabbit, if you love it, it becomes real. If you eventually forget what you paid for it, that was a good deal.