Pink gin in the Club House pub, wedding on TV. No crowds. There was more enthusiasm for The Wedding in the US than in Ireland.

We made a speedy exit from Dublin. It was Saturday, May 19th, and we needed to get to the Club House Hotel in Kilkenny in time for The Wedding. I had booked the hotel only after the front desk assured us that we could watch the festivities in their bar. Previous research had revealed that the wedding would not be on every single pub TV in Ireland, because, well, soccer.

A race! Secured rental car, tried to jump in. (Tom gallantly opening the right front door for me, only to discover a steering wheel there.) Harry the Hyundai cooperated with Tom’s efforts to stick to the left and conquer roundabouts. We were briefly lost, then squealed into Kilkenny with just enough time to park the car, get lost on foot, then rush into the Club House Bar seconds before the vows began. Phew.

I had been to Kilkenny before, to a Jung conference where they attempted to link ancient pagan rituals with the fairy archetype or the shadow side of leprechauns. But this time I explored it.

The main street is called the Medieval Mile, because it stretches between the 13th Century Cathedral of St. Canice, and the 12th Century Kilkenny Castle. The street has several ancient buildings, some preserved as museums, but mostly turned into shoe stores, pharmacies, charity thrift shops, and very loud bars.

We visited the castle, which was quite well furnished in the sense that we could see how people lived in it. I loved the extraordinary display of about two dozen silver platters with amazing domes, which would be covering the scrambled eggs and kippers. The castle belonged for 600 years to the noble Butler family, who eventually sold it in 1967 to the city of Kilkenny for 50 pounds. It is hard to heat.

Tom walked twice around the castle park, a one-hour loop, while I toured the Rothe House, a 1694 home done up to represent the everyday life of the merchant class. My favorite part was the plague doctor, in plague- proof outfit, who would scare anybody into the Black Death. 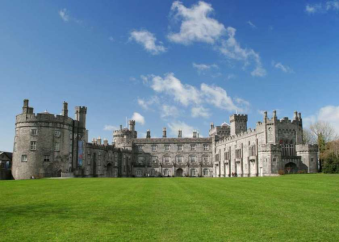 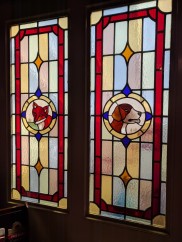 Stained glass at the Hunt Club 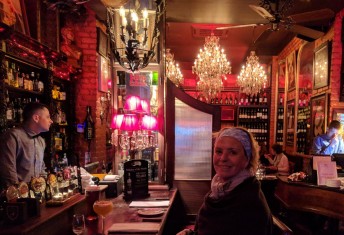 At 220 years old, our hotel was the oldest in Kilkenny. It was founded as a men’s club in 1797 by Sir John Power of Kilfane who also started the Kilkenny hunt, which is still going strong. Foxes and hounds are well represented in the interior stained glass, the breakfast room is splendid, and the hallways still carry a whiff of ancient pipe smoke and sweaty horses. Real Kilkennians gathered in its restaurant, sipping tea, Guiness, and pink gin with floating strawberries.

That’s what I ordered to toast The Wedding. It seemed like something the late Queen Mother, Elizabeth Bowes-Lyon, would do. She was famous for her gin consumption, though she also loved pink champagne and lived to the age of 101. Coincidence? I think not. And this wedding? She would have toasted it most heartily.