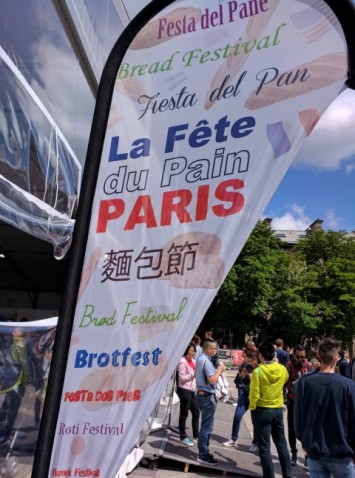 In a ritual he treasures, Tom goes off every morning to fetch our breakfast baguette. By the time Tom and the baguette get home, one end has inevitably been bitten off. Every single day. He claims he doesn’t know how it happens.

But he is not the only victim. On the streets of Paris, we see many other bitten off baguettes in the hands of small boys, nuns, fashion models, construction workers, and young husbands going home for dinner. Almost as enablers, the bakeries themselves sell the baguettes in bags half the length of the loaf, as though expecting it to be half gone before it hits the table. In fact, we have concluded that an entire unbitten baguette in transit is the exception, not the rule.

A bit of research revealed that under a 1993 law, an official “traditional” French baguette contains only wheat flour, clean water, and salt. The dough must be kneaded according to a legal protocol, and must be between 55-65 cm in length and 250-300g in weight. No preservatives may be added. Hence, a baguette has a short life, and the sooner one starts eating it, the better.

So the biters are indeed the buyers, who are culturally entitled to chomp off the end while carrying it home. They only last 24 hours before turning into rock (the baguettes, not the biters).

As we pondered these issues, the annual Grand Prix de la Baguette de Tradition Française de la Ville de Paris held its award show in a huge tent outside of City Hall. The first-prize winner gets to provide bread for the new President Macron for one year, while simultaneously enduring lines around the block of his shop.

Superstar bakers in white coats and ribbons and medals clustered about slapping each other on the back around a set of portable ovens. Lesser minions demonstrated kneading, rolling, and shaping. The rest of the tent was devoted to the sale of breads of all stripes, along with some pretty dandy pastry stuffed with cheese, chocolate, almond paste, lemon curd, sausages, creme anglaise, and we couldn’t see what all else because the crowd was too thick.

The best baguette baker of the year 2017, turns out to be Sami Bouattour, 193 rue de Tolbiac, in the 13e arrondissement. Tom instantly wanted to go. Then he realized that it was a one hour and four minute walk. That loaf would never make it back here at all.

1 thought on “The Baguette Biters”