Okay. I admit it. My very very favorite thing to do in Paris is shop. I shop every single day, though I rarely buy anything. The joy of shopping, especially here in Paris, is enjoying the magnificent products of France and the incredibly luscious way they are displayed. In other words, shopping is like going to a museum.

What joy, then, when I found a museum that’s like shopping! I speak of the Palais Galliera, a smallish treasure on the Right Bank otherwise known as the Musée de mode de la Ville de Paris. It apparently has a huge collection of getups going back to the 18th Century, plus a special underthings collection. This week it was featuring the wardrobe of the late singer/actress/European superstar, Dalida. If you have not heard of Dalida, think of Celine Dion in Vegas, and you’ll get the idea. 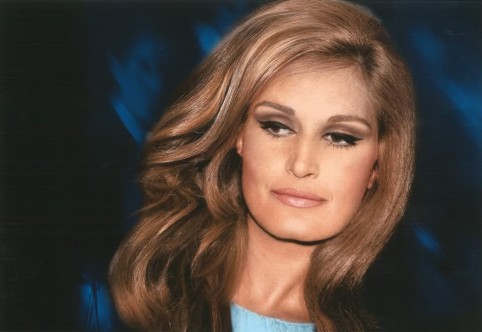 A former Miss Egypt, Dalida got into show biz in the mid-fifties, and the show opens with an early costume, a bright red velvet bustier dress with about a 19-inch waist. The clothes get more and more sophisticated and we see a little Pierre Cardin, a little Balmain, and a little Yves St. Laurent.

Then the costumes kind of explode into ruffles, feathers, and sequins in white, gold, red, and a little helping of leopard. Projected on the walls is a running film of Dalida musical performance in which she is wearing the same costumes, and is always surrounded by four lithe young male dancers. Dalida’s career morphed into pop, rock, and disco, with a change of look for each incarnation. 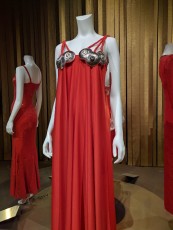 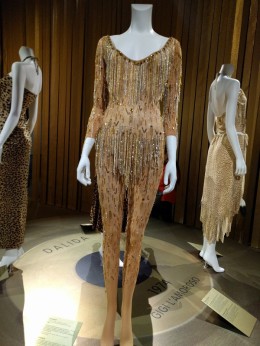 As glamorous as all this was, her private life was soaked in tragedy. In 1967, her fiancé committed suicide after being eliminated from a singing contest. In the years to follow, three more lovers chose to end it all by gunshot, window-leaping, and inhaling the exhaust of a Renault 25. Eventually, Dalida herself overdosed on barbiturates in 1987, leaving behind a note that said “Life has become unbearable … forgive me.” 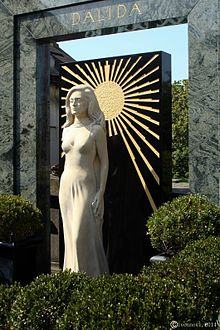 There is one little victory in death, though. At the age of 53, she was exactly the same size as she was at the age of 25.