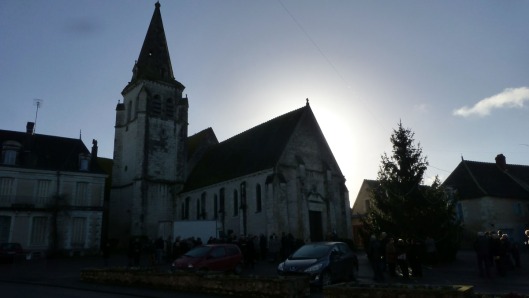 Look carefully and you’ll see the crowd outside the church

As I write this, sympathizers all over the Western world are holding gatherings in honor of the seventeen victims of last week’s terrorist attacks on the French magazine Charlie Hebdo and the ensuing carnage.

Our little village of Martizay is no exception. The Je Suis Charlie (“I am Charlie”) posters were up at our grocery and two bakeries yesterday, and an email went out from city hall. As 11 AM drew near, we biked to the village square, and saw people leaving their front doors and gates, all striding purposefully in the same direction. The woman who runs the art gallery closed it for an hour and came out. The man at the antique store fumbled to lock his door while carrying a baby still sucking at a bottle, because no feeding was more important than this : a town full of shocked and violated citizens of the Republic got to do something in response to the horror in Paris, some 200 miles north east of here.

What made this all the more extraordinary is that in our eight days in Martizay, we have seen practically nobody on the streets. It is a town of farming, retirees, and summer homes, many now closed up. In the damp January of the flat swampy Parc de la Brenne, the downtown is dead by day and night. Even the bar closes before sundown.

But there are some 1000 people in Martizay and a good 100 of them showed up on the square outside the church on a rare sunny day. Country people are not demonstrative, beyond the multiple cheek kisses exchanged in greeting. Everybody knew most everybody else, it seemed.

Babies, toddlers, young parents trying to explain what was happening, a clutch of widows surveying the crowd, the older men who play boules on Wednesdays, and the young folk who commute to work in Chateauroux and Poitiers — all gathered in little groups. People were happy to see each other, but the air was subdued. Nobody knew exactly what to do except show up. They wore the distinctive “Je Suis Charlie” badges, and carried signs.

Riding our bikes into town

The mayor addresses the crowd

Everyone wore a sticker

We all went to the local bar afterward

Only fifteen minutes late, Mayor Jean-Michel Loupias quieted the crowd and pulled out his speech on white paper. It was carefully composed in the elegant French style of formal discourse. He said that this event would live forever in our history and memory, that the right of free speech has long been a sacred French tenet, and that this event held possibilities to lead us back to the Inquisition. He added that we would not be discouraged, or shaken, or changed by these events. Then he called for a moment of silence, which was being observed all over France today.

Lastly, we all signed the register, a new and beautiful hardbound white book of coffee table dimensions. People wrote messages of support, and added their names. This book will be sent to Charlie Hebdo. The crowd dispersed in little clutches, and we headed over to the tiny Bar-Tabac. Like the clumsy Americans that we are, we grabbed the last table of the five, and were joined by another couple, who, in the country French way, failed to introduce themselves.

But I introduced us, and there followed some interesting chat about the history and present of Martizay. The couple, from Martizay families, have been sweethearts since the age of twelve. He told us that this is “la France profonde” – deep France. In summer there are city French, Dutch, and British folk, but now there are only the real people, and he added, “they are not rich people.”

Service was slow, our new friends said, because the barkeep had brought in a contractor friend to help serve drinks for the weekly Sunday midday gathering, thickened this week by the Charlie event. “This is not his job,” the man explained. After downing a thimble of wine each, they picked up the check, against our protests, and went back to their own little house down the street. But first we wrested their names from them: Michel and Marise.

I am thinking that this demonstration would have been different in a big city. In the crowd of 700,000 who assembled yesterday in Paris, I would have been guarding my wallet and my toes. Here, it was possible to focus on the meditation at hand, and the 98 strangers did not seem so strange. We didn’t have to know each other to understand what was happening. And then we did know each other.