Is she shy? Louise?

No. Not Louise. If a male rhino were charging her, she’d smile and ask him if he would like to sit down and talk about it. Definitely not shy.

She’s also an indefatigable shopper, a lover of all things French, and an unrestrained Parisian fangirl. So why hasn’t she written a post about our stay there? We’ll be there in a week, after all. 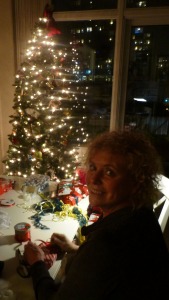 Wrapping presents by the tree

She claims she’s been too busy. Don’t be offended, she has been busy. We’ve erected no fewer than three Christmas trees in our apartment, which she has decorated; she has wrapped scores of presents (I don’t wrap; I’d rather have my fingernails pulled out with pliers), she’s packing for our trip, and she’s helping me prepare the apartment for our renter Michael, who arrives three hours after we depart.

She hasn’t been too busy to neglect our Parisian lodging, however. She has found a hotel in Le Marais, a historic district in Paris where we will stay the nights of January 2nd and 3rd. The Knights Templar built a fortified church there, and the Knights Templar were very rich. (Yes, they were knights—soldiers—but they were also financiers, the Berkshire Hathaway of the Thirteenth Century). The knights’ temple turned the district into an attractive area, and many hotels, religious institutions, and residences graced the neighborhood. Not bad for an old swamp. (Le Marais means “The Swamp.”)

Le Marais fell into and out of favor with the Parisians, but today it’s back in favor—a fashionable district with trendy restaurants, fashion houses, and hip galleries. There are large Chinese and Jewish contingents, and a delightful gayborhood in the southwestern portion.

For her not to be spilling words onto this blog with exuberance and abandon is alarmingly out of character. My point: she is really busy. Right now she’s baking a traditional pork pie. Yesterday she steamed up a huge pot of paella. A Christmas Eve dinner is reserved in Departures, one of Portland’s most elegant (and appropriate!) restaurants. Our children and their families begin arriving in a matter of minutes—seven in all. It will be a grand celebration, one worthy of elaborate preparation, and no one will ever accuse Louise of shirking that responsibility.

Even if it must come at the expense of exuberance and abandon.

13 thoughts on “One Week to Paris”