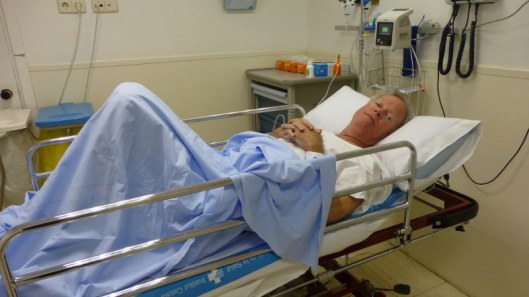 Long-term readers will recall my medical event almost a year ago in Spain. Three posts addressed the event, here, here, and here. Medical insurance was mentioned, but a financial resolution was not. I paid twenty thousand dollars to a Spanish hospital; was I ever reimbursed? The answer was not to be found in this blog until now.

Disclaimer: If you follow this blog as a travelog, I will forgive you if you skip this post. There are no pictures. There’s no new territory to explore. On the other hand, some of you are interested in the practical elements of full-time travel: finance, transportation, preparation, and insurance. To paraphrase Anheuser-Busch, this post is for you. This is a log of my traveler’s medical-insurance events, from inception to resolution. May they rest in peace.

April 22, 2013: In Spain, a sudden severe headache sends me in search of medical care. I am hospitalized and require brain surgery (hat’s me in the Spanish hospital pictured above). Medications from the brain surgery provoke a heart attack a week later. There is more surgery, but I’m cleared for release in early May. The hospital bill is $20,000 US, which I pay personally.

June 4, 2013: I submit a $20,000 claim to my insurance carrier using their online claim form, requesting a wire transfer of the cash to my bank account. The wire transfer option is the first option listed on the form.

August 21, 2013: I email my insurance carrier asking if there has been any progress on my two claims. They respond by saying that yes, they did receive the claim, but “due to the fact that the direction of pay was a wire transfer, the claim was stalled.” (You’ll recall that a wire transfer was the first payment option available on the claim form.) They also say that, “A further review of our records indicate that we have received returned mail. On June 18, 2013, we attempted to call you at [my discontinued US phone number], which is no longer in service.” This delay, to my mind, was reasonable. The only one.

My initial email was sent via my personal email account. All the rest of our communication transpired via a secure email network that was operated by the carrier.

August 22, 2013: I write back, explaining that we don’t have a permanent address or phone number, that we’re vagabonds, living a life on the road. This may have been an error.

August 22, 2013: The insurance carrier responds by saying, “At this time we are looking into the demographic changes given.”

August 27, 2013: Another note from the carrier: “Please note that your permanent address must be inside our service area in order for you to be a member of [my insurance plan]. You may request that we send mail to you at another address outside our service area. You may also temporarily reside for up to 12 months outside our service area and remain a member….” They also indicate that they had sent a “residence verification letter” to my daughter’s address in Portland, which is the address I have been using for paper mail. The residence verification letter must be hand-signed.

September 11, 2013: Louise and I have returned to the US for the month of September. I collect the residence verification letter from my daughter, sign it, and send it back to the carrier.

September 13, 2013: An email from the carrier says, “The international claim…has [been] processed and payment has been sent to you….” Hallelujah! The check is in the mail!

September 25, 2013: No check has been received. I inquire politely.

October 2, 2013: Their reply, “Our records do not indicate a second claim…. We are researching this issue….”

October 4, 2013: The carrier asks me to resubmit the June 4th claim. Miraculously, although I am now living in Mexico and three prior countries of residence have passed, I still have the original claim in my suitcase and am able to copy the form and comply with their request (see below).

October 7, 2013: I email an electronic copy of the original claim form and receive a thank-you note from the carrier a few hours later. The note also contained my favorite line from all of our correspondence: “It is possible they missed the facility bill….” (“They,” in this context, being another department of the carrier’s office.) In other words, the carrier is saying that they have been completely ignorant of my $20,000 claim since its inception, in spite of their statement August 21 saying that they had received it.

It’s interesting to note that this email was deleted from their system soon thereafter. None of the other emails were. Fortunately, I made a copy for my records before it disappeared.

January 9, 2014: Three months pass. I email the carrier again, asking if there has been any progress.

January 10, 2014: The carrier replies saying that they have sent mail to my Spanish hospital asking for copies of all my records and that the hospital hasn’t responded. Their email concludes by saying, “The claim has been denied at this time due to ‘requested information not received.'” DENIED!  In Mexico, it was time for a margarita.

January 13, 2014: I email the hospital myself, requesting my records.

January 14, 2014: The hospital emails back within 24 hours, saying the records have been sent to my daughter’s address. Quite fortunately, my daughter was scheduled to visit us in Puerto Vallarta soon thereafter, and when she does she brings the records with her.

January 28, 2014: I scan nineteen pages of hospital records and email everything to the carrier.

February 25, 2014: An email from the carrier: “We have completed processing of claim [number redacted] for date of service April 22, 2013. A reimbursement check will be sent to you….” I email my daughter, telling her to be on the lookout for the money. In Mexico, it was time for another margarita.

March 5, 2014: An email from my daughter in Portland says: “The check has arrived.” She photographs the check and all the accompanying paperwork, attaches the photos to an email and sends it to me. The check is for $10,649, $9,750 short of the $20,399 I paid the hospital. Almost all of the unpaid claim is for hospital room charges.

Naturally, I’m perturbed. I  ask a friend — he has been in the insurance business for almost fifty years — to look everything over. He explains that the overseas section of my policy promises to cover “emergency medical costs,” and that most of the room charges were not emergency in nature. To paraphrase my friend: “Nine thousand dollars to have people save your life — twice — seems like a bargain to me.” He’s right, as he usually is. That’s why I called on him to help.

March 21, 2014: I ask my daughter to deposit the check and the matter is closed. Total time required from my original claim submission until payment: nine months.

Regardless of the nature of one’s coverage — Medicare supplement, travelers’ rider, or travelers’ medical — anyone embarking on an expat adventure such as ours had best have either a ready line of credit or plenty of money in the bank. Hospitals in far-away countries do not like to collect from American insurance companies (I can’t imagine why), and some hospitals, like mine, will not release you until you’ve paid in full.

To be specific: Have money in the bank, be monastically patient, and be prepared to ask how high when they tell you to jump.

In this post, I listed some of the things we miss the most by not having a permanent home. I omitted one important item: a nearby in-network medical facility. Having brain surgery and a heart attack was bad enough; the added insult of pursuing a lengthy and expensive insurance claim was simply tyrannical.

Adventure is a wondrous thing. Most of it.

6 thoughts on “In Mexico, It Was Time for Another Margarita”