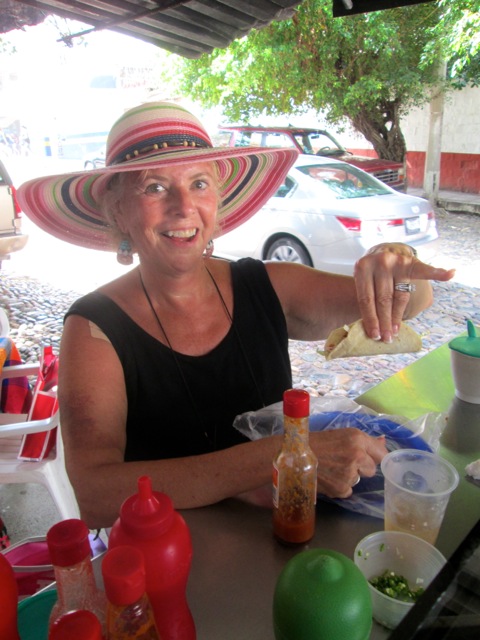 I’ve been eating in Mexican restaurants for a zillion years, but I didn’t know how ignorant I was about Mexican cuisine until faced with multitude of unidentifiable foodstuffs in the Mexican supermarket. Dried beef? Tripe? Hominy? Pozole? Menudo?

More research is needed! We signed up for the Signature Taco Tour with Vallarta Eats, a food-tour company founded three years ago by Eric Wichner, a former Philadelphia nonprofit-development type. He has always loved tacos. Tourists shy away from Mexican street food. They shouldn’t, at least not after taking Eric’s tour. Four thousand customers, and, he boasts, nobody has gotten sick.

We met our guide, Memo (short for Guillermo, or William), a remarkably slim lad from Mexico City. Memo claimed he just lost forty pounds, accidentally, by leading taco-lovers on the four-hour daily tours in the damp heat of August through October. (Memo doesn’t eat during the tour. He should.)

The goal was to unravel the mysteries of the various food carts in the back streets of Puerto Vallarta. These carts do not roll; they are in licensed spots and most have been in a particular family for decades. A Mexican taco is nothing like a Taco Bell taco. It’s a small soft tortilla loaded with stew or fried something or chopped whatever, and topped with sauces that come in several flavors: hot, hotter, and hotter than that, with a competition for hottest. (Hot food makes you sweat, which cools you off. Hot = cool. But you knew that, right?) 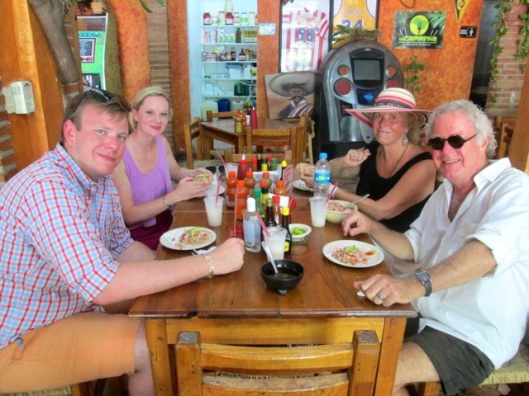 Tours are small. Honeymooners Chris and Whitney are seated at left. It was just the four of us.

First we stopped for Mexican breakfast, which is birria, a spicy brisket stew, and an excellent hangover cure. The cook had a big pot he’d made at home. When he ran out of birria at about 11:00 AM, he closed up.

We had tacos with carnitas, which is shredded pork fried in pork fat. Then we sampled chicharron, the salty cocktail snacks the Mexicans make out of pig skin, a bit of deep fried pork jowl, which was amazing, and the source of it all, the nearby butcher shop where parts of pig awaited their various kettles of boiling oil.

Tom and me: happy taco eaters.

Near the market, we watched a tortilla machine turning out the flat breads made of only corn and water. Memo bought us a package of still-hot cakes, which we salted and ate on the spot. Memo told us that corn tortillas are the basic Mexican carbo; some people eat up to thirty a day.

The tortilla machine. The glop at the top is simply ground corn and water. Tortillas come out the other end.

As one stop followed another, it all became blurry. You know what a food haze is, right?

At a produce store, we learned that Mexican lemons (limones) were all green, and if you’re such a gringo that you insist on yellow ones, we’ll, they’re available, but yellow means they’re overripe. The Mexican version of the lime, though, is called a lima. It is also green, but sweet-ish, and frankly, kind of lame.

The produce store is a feast for the eyes and the mouth.

Time for seafood! How about a taco wrapped around a little chili relleno stuffed with shrimp and octopus? At another cart, we had the world’s best fish taco: little filets of mahi-mahi that swam that morning, deep fried while we waited, then wrapped in a tortilla made just as we arrived. Sauces of course. Lots of sauces. 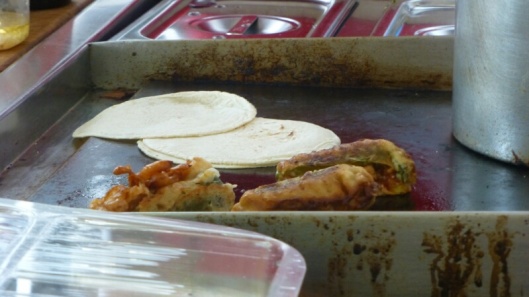 Off to La Cólera, a splendid seafood joint for locals, where we sampled Mexican ceviche: blanched white fish chopped up very, very small with cabbage, salsa, onions, and lemon juice. On a tortilla. This could be topped with a choice of nine different bottled sauces on each table, and three more fresh ones in bowls. We did inquire about the unusual name of the eatery: La Cólera. Memo was also puzzled. He said it means either “anger” or “a disease you get from eating bad seafood.” He had no idea how that name had been chosen, but Tom noted that all the waitresses were beautiful, and the place is always packed. So, is there a problem? 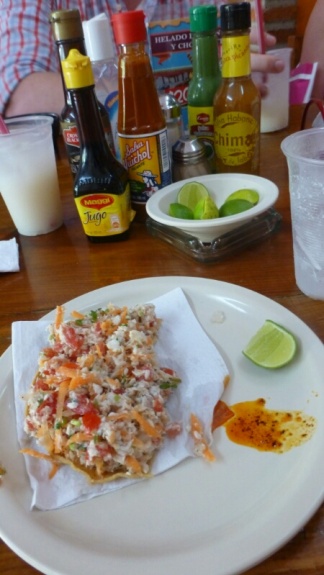 Fresh ceviche and a zillion sauces. Mouth, be ready!

At the ice cream stand, we got one of twenty flavors of freshly-made creamsicles (mine was guanabana), and then finished up at a cram-packed Mexican candy store, where the local favorites are made of fruits, milk, and nuts in a million different ways. We sampled cajeta, a syrup of dulce de leche, which is essentially a cross between sweetened condensed milk and caramel. Dulce also comes in a solid, fudge-like form and is wacky good. All this was polished off with a couple of samples of rompope, an eggnoggy rum liqueur made by (clearly very happy) nuns.

We had stopped at eleven carts (and were the only non-Mexicans at each one) and sampled six desserts. Panting, sweating and holding our distended tummies, we bade a happy farewell to Memo, and caught the blue bus home. 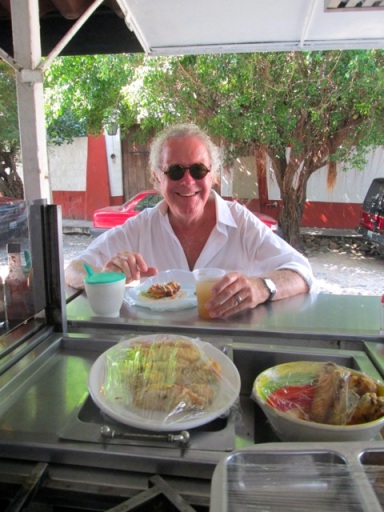 With a forced smile, Tom bravely finishes off the final taco of the day. There was a LOT of food on the tour.

What a learning experience! I now felt I could take on any Mexican food store with sophistication and a foodie’s knowing swagger. I’d charge in there looking for tortillas de maiz and meat for birria, poblano peppers and three kinds of limes. Problem is, we both swore we’d never eat again. Urp.

12 thoughts on “The Tale of Eleven Tacos”