Way back last year, before embarking on this adventure, we did a month-long research project on the feasibility of expathood. We did this in the charming and obscure town of Collioure, France, just north of the Spanish border on the Mediterranean. (Read all about it here.) The goal was to see if we could stand:

Of course this all went well, or we wouldn’t be here now. The elements of that success were the amazing house with a fab Ikea kitchen that we rented from Laleña Vann through http://www.holidaylettings.co.uk; and the fabulous friends she sent along to care for us. Kathleen Cornelia (Rochester, NY) and Phil Colclough (London, England), who came knocking on our door early in the month and proceeded to show us the sights, the hangouts, the names of good restaurants and markets, and their very best selves. Kathleen and Phil have a TTF (Teeny Tiny Flat) in Collioure, and another in London.

Because none of us could afford the restaurants in Collioure, we also cooked for each other, met on Sundays for coffee by the sea, and met after dinner for a glass of red at the legendary bar, Les Templiers.

Kathleen and Phil showed us in what ways the expat life is fun, and in what ways it is not, but fun won. Since we left them last May, Kathleen has been sending us email messages of encouragement and good cheer about what she calls “jumping off the cliff.”

Since Collioure is only at worst an hour away from Girona (depending on which trains you get) we decided to dash up and see them, along with Laleña, (Los Angeles, CA) who was actually, boldly, living in what we consider our house.

Hence, we rented a room at the charming-for-cheap Les Mas des Citronniers, and had a beer by the beach where the first bikini tops of the season were being shed (see photo at the top of this post). We later arrived at Laleña’s door with wine, bread and roses. She had made a salad, and Kathleen and Phil brought hugs, potatoes, and fish. 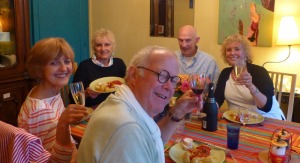 Around the dinner table. From left: Kathleen, Laleña, Tom, Phil, me.

During an epic dinner, we toasted each other, Catalonia, and expathood; and exchanged stories with the enthusiasm that only new friends can stand. It was important to tell them that they were among the very first to show us that this way of life can work. We all work it a little differently, but we recognize each other as souls who enjoy being restless.

The next day we dashed through the rain at the splendid market town of Ceret, and huddled under umbrellas with coffee, wishing for a fireplace. The weather change had been that drastic: bikinis to brollies in a day.

Like all who return to a beloved spot, we wanted everything to be the same. T’wasn’t. Our wine shop man, FeFe, had closed up for the day without a decent explanation. The beggar with the designer scarf, Monsieur Burberry, had disappeared. The beloved and aged owner of Les Templiers, JoJo Pous, who had played cards with a little bunch of copins in his bar every afternoon, had died. The little white dog who patrolled our street, also named JoJo, had lost his owner to the Grim Reaper but had been readopted by a neighbor who no longer lets him patrol. He is, after all, 98 in people years. I’m pretty sure he remembered us.

We tried for a hot lunch before departure, having forgotten that a bowl of soup in Collioure runs about $15. Instead, we split a sandwich, and Phil and Kathleen kindly took us to the train, where we were whisked back to the land of affordable everything.

The sun was out, too.

8 thoughts on “Meanwhile, Back in France…”