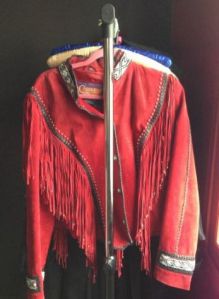 We have moved across town to our friend’s flat while she is in Hawaii so that the estate-sale people could organize and tag and display the things we left behind. Robin Caton, our sale maven, suggested I visit the sale at the opening minute – 9 AM – when the most…er, colorful…people push their way in after standing in a chilly early morning queue.

I took the bus (our car is in the tag sale) and thus missed the opening minute. On the bus, I read a story about a $3 tag-sale find somewhere that turned out to be a rare Chinese bowl worth $2.2 million. Oops. I fretted all the way across the river about what I might have left behind in what used to be the comfortable, private, well-functioning apartment that Tom and I once shared.

I worried that I’d find my red suede fringed cowboy jacket on sale for a dollar, and grungy shoppers wandering around openly sneering at our taste. I feared that people were dismissing my homemade jewelry and smirking at the greasy residue on the spice bottles. I also feared finding something tremendously valuable that had accidentally been left behind, now in the clutches of an excited treasure hunter who was sprinting away from the cashier. 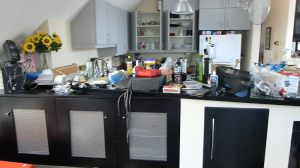 A flea market? No. It used to be our apartment.

After one quick tour, I left the apartment in Robin’s hands. On the bus back, I read another story proposing that Portland’s fifteen minutes of fame as a mecca for food, coffee, beer, wine, and television is nearly over. Portland is allegedly losing its luster, and also losing us. Coincidence?

Then I read further and discovered the Lufthansa strike. We’re flying Lufthansa to Barcelona next weekend. Surely it will be settled by then.

I put the paper away. I read too much, anyway.

3 thoughts on “Cowboy Jacket: One Dollar”