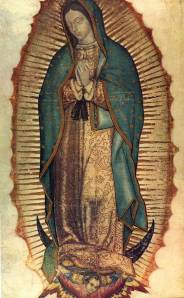 While Louise and I dance on the rim of sanity, impatiently contemplating our departure 52 days from now, a brief diversion…

December 9 is the Day of Our Lady of Guadalupe in Mexico. The Lady in question is the Virgin Mary, who according to legend made an appearance – in 1531 – in what is now Mexico City. Blooming roses sprang at her feet (in chilly December, and roses aren’t native to Mexico) along with a passel of other miracles. Within six years of the apparition, six million Aztecs had converted to Catholicism.

In Puerto Vallarta where we will live next winter, the crowning landmark (if you will: see photo) is the Church of Our Lady of Guadalupe. In early December, processions wind through the city on their way to this church. There’s a procession every night for a week, each procession lasts a couple of hours, and everyone shows up for the party.

The one-minute video below (filmed during Guadalupe last December while we visited Puerto Vallarta) focuses on one of the hundreds of floats featuring a teenage Virgin in a pose to match the drawing at the top of this post. I’m fond of this video because, in spite of admonitions to look seraphic, this Virgin seems to spot an acquaintance in the crowd and break character, briefly exposing a smile and some orthodontia within. Watch the eyes. Musta been a boy.

5 thoughts on “Our Lady of Guadalupe”