This part of Costa Rica – the northern Pacific Coast – is a paradise of beaches and not much else. (This is why you’ve read nothing uplifting about our visits to ancient Mayan ruins.) Yesterday we visited Playa Conchal (Beach of Shells), recommended for having the clearest blue water around.

We boarded the beach bus with six girls in bikinis and another geezer couple. After a half hour’s drive through the jungle, we pulled up in the tiny village of Brasilito, built of sand and (mostly) shacks.

We disembarked and followed the crowd afoot along a half mile of deserted beach. At last we came upon the celebrated Playa Conchal, rather short as beaches go, and studded with giant mismatched square canopies, rickety plastic chairs, and laughing people.

We rented two chairs and a canopy from Wilbur, one of the local businessmen, and looked out upon the clearest turquoise water I’ve ever seen. The beach is made of crushed shells, not sand, so beachside surf never gets sandy gray. It was pure blue all the way to the waterline. Stunning.

The rocks, surf, and crosscurrents were jockeying the waves this way and that, enough to make a helicopter parent blanch. But these local parents were sitting on the beach with their kids, smashed over and over by waves that would lift and slide them gleefully around in unpredictable directions. We kept stumbling at the shoreline where the currents were wackiest. At last, the two of us just gave up and tried the sitz-surfing, joining the surprised shriekers who never knew where the next wave would take them.

We are (blessedly) used to restaurants right on Tamarindo Beach. Some are glamorous and some wouldn’t pass the most lenient food safety inspection, even with a generous bribe. All of them have pet iguanas. The Conchal version of seaside hospitality is Wilbur’s van. We noticed people around us eating whole red snappers out of burnt foil. Wilbur was quick to offer us lunch from his makeshift kitchen. 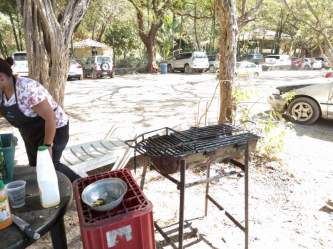 Wilbur (right) and his buddy Eddie

Children tossed around in the surf

The muddy van was loaded on the inside with even muddier coolers for meat and drinks. (Anything from water to a rum punch.) The roof was topped with a water tank which flowed into a faucet by the rear tire. The bent and blackened grill was out the back door. Wilbur offered us fish or ceviche or pork or chicken skewer, plus any kind of exotic cocktail from his portable restaurant. I’m sure it would have been fabulous. Maybe. We drank four bottles of water.

Finally surfed out, pebbles and little shells stuck to our bodies beneath our suits, we walked back to Brasilito and sat at a terrace restaurant for salad and beer. Before us stretched deserted Brasilito Beach, next door to Conchal, where nobody swam or sat. “Whuzzup with that?” we asked our waiter. “Sharks? Sea snakes? Poisonous rays?” But no.

He explained that people like to be where the action is. Conchal has other people and loud reggae music. It has vendors with ceramic pots, pot, beads, cigars, bird whistles and sarongs. It has sitz-surfing and crystal blue water. But the real draw, I like to think, is Wilbur’s rolling restaurant. You know the food is safe because none of it is green.