“Today we will visit a bakery.”

That was Vicky, our tour guide. To be fair, I’m as much a lover of chouquettes and panettones as the next guy, but we had committed five of our precious remaining expat days, and paid big money for airline tickets, hotels, and the tour itself — and now Vicky is dragging us to a bakery. This was Mexico City, the largest metropolitan area in the Western Hemisphere! What happened to Aztek ruins,  Mesoamerican pyramids, Diego Rivera murals?

As a Portlander, I’m a little jaded by bakeries. After all, Portland is the home of Voodoo Donuts. 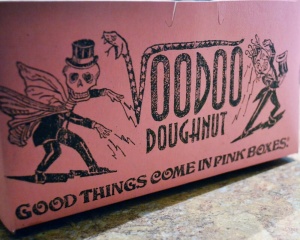 When you visit the Portland airport as often as I do, you tire of people guarding pink Voodoo boxes as if they had just scored an ounce of Chiba Chiba. Really now: a donut is just a donut. Some are better than others, but none are worthy of deification. So how can one justify the inclusion of a bakery in our expensive tour’s itinerary?

Nonetheless, Saturday afternoon found us on a nondescript street in Mexico City, following Vicky into the Pastelería Ideal, where all my preconceived bakery notions dispersed like cake flour blown into the wind. Imagine your first glimpse of the Taj Mahal or the Grand Canyon. Impressive stuff, but almost so grand as to not be comprehensible. But a bakery? Anybody can comprehend a bakery. 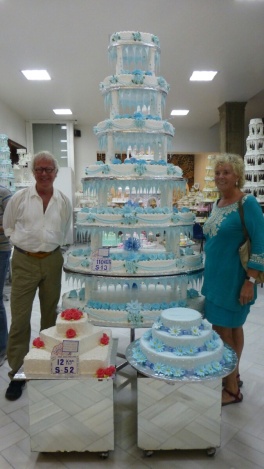 For eighty-seven years the Pastelería Ideal has been to bakeries as Saint Peter’s is to an Amish chapel. Each floor is as big as a supermarket. Cakes, pies, pastries, breads, and — yes — donuts are so plentiful it seems as if they’re trying to feed the world. And that just may be what they’re doing: customers pack the floor like Pringles in a tube, each with a pizza-sized tray overflowing with a cornucopia of confections. It’s positively sybaritic. And fragrant, of course. Fragrant as only a supermarket-sized, multiple-story bakery can be.

Pink Voodoo boxes? Give me a break! If you really want to impress the jaded locals at PDX, try a blue box from the Pastelería Ideal. Now that’s class.

NOTE: Louise and I have just returned from a five-day, four-night tour of Mexico City. It was nothing like I expected. The next three or four posts will attempt to describe what we saw and how we felt while visiting the — according to Wikipedia — largest metropolitan area in the Western Hemisphere.

6 thoughts on “No Pink Boxes Here”