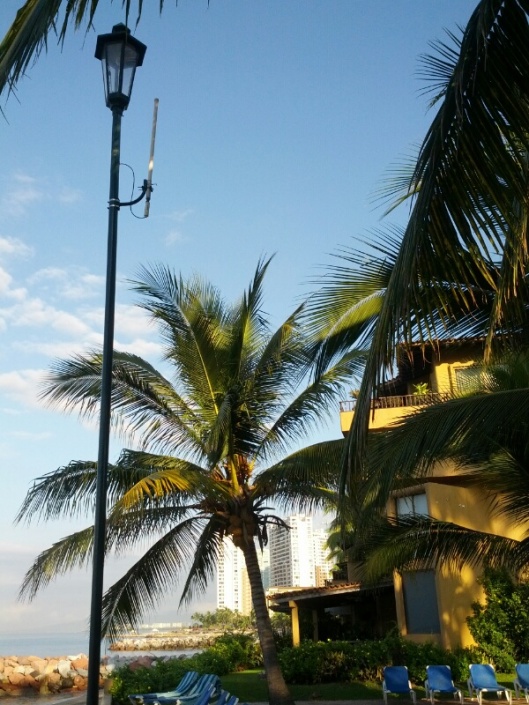 We’re all savvy now. We know the answer to that question: no one! Unless you live in Los Tules. It’s a different story here.

The picture above identifies the issue. It’s a light pole, yes, but look carefully: see the white “wand” attached to it? That’s the Wi-Fi router antenna for four buildings. Each building contains six or seven apartments. Each apartment houses — oh,  I dunno — one or two computers. Maybe thirty or forty computers in all. All sharing that antenna. There’s no indoor Wi-Fi here.

That’s the other issue: the exterior walls in these apartments are eight-inch-thick concrete, probably reinforced with rebar. Radio signals cannot penetrate walls like that. You wanna log on to the Wi-Fi signal? Go outside. At Los Tules, we don’t go outside to get a tan; we go outside to get a signal.

Mornings find me in the dark, on the patio, up- and downloading everything I expect to need for the day. As the day progresses, people (and their computers) appear on balconies, on patios, and especially around the pool, frantically vying for increasingly scarce bits and bytes, clandestinely eyeing each others’ screens, trying to determine who’s downloading Gone with the Wind and whether to snip the cyberhog’s power cord before or after Atlanta burns.

So,  who owns the Internet? At Los Tules, it’s the guy who gets there first.

9 thoughts on “Who Owns the Internet?”