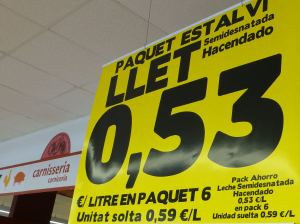 Nothing could have prepared me for Catalan. Well, maybe my sixty years of French study and forty years of Spanish study and those two miserable years of Latin. But the Catalan independence movement around here has become so fierce that the signs and menus are no longer bilingual in Catalan and Castilian Spanish, as they were just last year. It’s all Catalan, all the time.

Derived from ancient rustic Latin spoken by Roman soldiers, Catalan is often easy to read. Privat means private, a pol is a pole, and a bol is a bowl. But it’s confusing. It often cuts off the last consonant of Spanish: estacion (station) is estacio, aproximacion is aproximacio. Other times, it adds a consonant that you have to pronounce: Argeles, a beach town in French Catalonia, should be pronounced by both French and Spanish with a silent “s.” But everybody pronounces the final “s.” Because it’s Catalan.

All of this is merely interesting and amusing until you are faced with an all-Catalan menu, as we were for Sunday tapas. Though hungry, I pulled out my new Catalan dictionary (the Spanish one is just getting dusty) and looked up the mystery words:

And then there were six words meaning chorizo. which is … a kind of sausage. 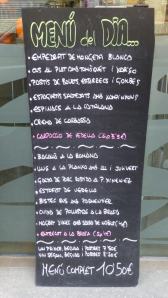 We knew the Fierce Potatoes were fries with Russian dressing, but it turns out the Manxega was Manchego cheese, served with bread smeared with tomato, a beloved Catalan snack. We tried too hard on that one.

We are both baffled. Tom came here to learn Spanish by immersion, but nobody’s speaking Spanish. I came here with a total of 102 years of Romance language education stuffed into my brain. Neither one of us knows what’s going on.

Still, in only a week, we’ve absorbed a lot of Catalan. Maybe when Catalonia takes over the world, there will be a need for skilled Yankee interpreters. That’s what we’re working towards.

Or maybe just being able to order lunch.

10 thoughts on “When Catalonia Takes Over the World”